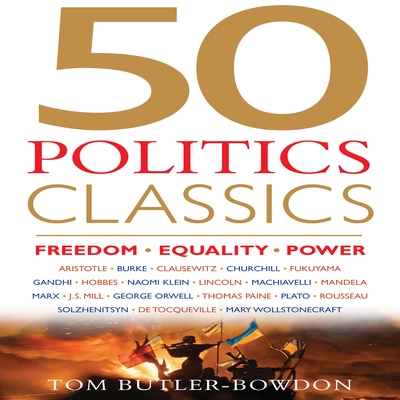 50 Politics Classics provides commentaries on the books, pamphlets, and speeches of major leaders, from Abraham Lincoln to Winston Churchill, and the texts from Aristotle to Naomi Klein, that drive real-world change.

Tom Butler-Bowdon's book spans 2,500 years of thinkers and doers, economists, activists, war strategists, visionary leaders, and philosophers of freedom. Are we living in The Post-American World? Is there a Clash of Civilizations? What is The Future of Power? Whether you consider yourself to be conservative, liberal, socialist, or Marxist, in these politically charged times we could all benefit from greater understanding of these key ideas.

"Tremendous. It educates and edifies, affirms and inspires."—Stephen Covey, author of The 7 Habits of Highly Effective People

"Terrific. Distilled to the point of joyous clarity."
—Richard Koch, author of The 80/20 Principle