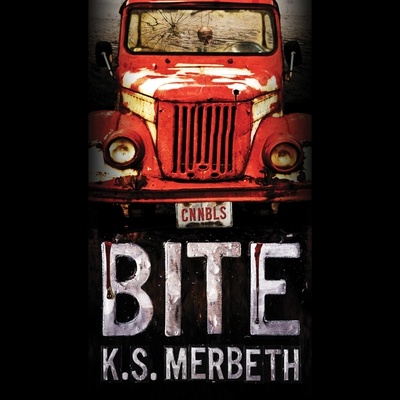 But as they journey across the wild together, Kid learns that her newfound crew may not be the heroes she was hoping for. And in a world that's lost its humanity, everyone has a bit of monster within them...

"Bite is a full throttle, sand-in-your-eyes, no holds barred ride through a Mad Max-style wasteland where the bad guys become family. Finally, an underdog with teeth!"—Delilah S. Dawson
"Merbeth's debut novel puts a unique spin on post-apocalyptic horror... Bite flips the script."—Barnes & Noble
"Filled with dark humor, wit, and a realistic dystopian setting, Bite plays with the idea of who the good guys are in such a harsh world. Think Carl Hiaasen thriller set in a Mad Max world, and you have an idea of what to expect."—Booklist (starred review)
"In an environment that turns people into monsters, where the line between good and bad is thinner than a knife-edge, survival is the least of Kid's problems. This post-apocalyptic debut may seem to take its scenery straight from the film Mad Max, but Merbeth has created her own universe filled with destruction and not a small amount of grim, acerbic wit. Fans of Mira Grant's "Newsflesh" series will be pleased by the smart writing."—Library Journal