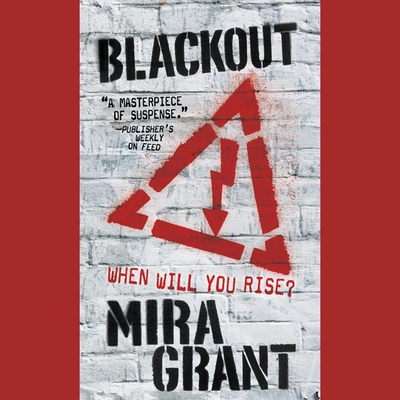 The year was 2039. The world didn't end when the zombies came, it just got worse. Georgia and Shaun Mason set out on the biggest story of their generation. The uncovered the biggest conspiracy since the Rising and realized that to tell the truth, sacrifices have to be made.

Now, the year is 2041, and the investigation that began with the election of President Ryman is much bigger than anyone had assumed. With too much left to do and not much time left to do it in, the surviving staff of After the End Times must face mad scientists, zombie bears, rogue government agencies-and if there's one thing they know is true in post-zombie America, it's this:

Things can always get worse.

BLACKOUT is the conclusion to the epic trilogy that began in the Hugo-nominated FEED and the sequel, DEADLINE.

For more from Mira Grant, check out:
ParasitologyParasiteSymbiont Chimera
Newsflesh Short FictionApocalypse Scenario #683: The BoxCountdownSan Diego 2014: The Last Stand of the California BrowncoatsHow Green This Land, How Blue This SeaThe Day the Dead Came to Show and TellPlease Do Not Taunt the Octopus

"Intelligent and intense, a thinking-person's post-apocalyptic zombie thriller set in a fully-realized future that is both fascinating and horrifying to behold."—John Joseph Adams on Feed
"The story starts with a bang as corruption, mystery, danger and excitement abound."—RT Book Reviews (4.5 stars) on Feed
"It's a novel with as much brains as heart, and both are filling and delicious."—The A. V. Club on Feed
"Intelligent and exciting...raises the bar for the genre."—Telegraph on Deadline
"Gripping, thrilling, and brutal... Shunning misogynistic horror tropes in favor of genuine drama and pure creepiness, McGuire has crafted a masterpiece of suspense with engaging, appealing characters who conduct a soul-shredding examination of what's true and what's reported."—Publishers Weekly (Starred Review) on Feed
"I can't wait for the next book."—N.K. Jemisin on Feed
"Wry and entertaining."—NPR Books on Blackout
"Feed is a proper thriller with zombies. Grant doesn't get carried away with describing her world or the virus. She's clearly thought both out brilliantly, but she doesn't let it get in the way of a taut, well-written story."—SFX on Feed
"Deft cultural touches, intriguing science, and amped-up action will delight Grant's numerous fans."—Publishers Weekly (starred review) on Deadline
"Astonishing ... a fascinating exploration of the future."—New York Times
"OK, all of you readers who want something weighty and yet light, campy and yet smart, horror with heart, a summer beach read that will stay in your head and whisper to you "what if," Deadline is just what you are looking for."—RT Book Reviews on Deadline
"While there's plenty of zombie mayhem, political snark, and pointedly funny observations here, the heart of this book is about human relationships, which are still the most important thing in the world...even in a world where you might have to shoot the person you love most in the head, just to stop them from biting off your face."—Locus on Feed