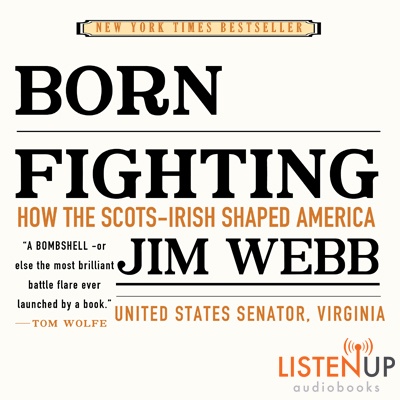 Born Fighting chronicles the full journey of the between 250,000 and 400,000 Scots-Irish settles who migrated to America in the eighteenth century. This remarkable group of settlers played a profound, ...

Born Fighting chronicles the full journey of the between 250,000 and 400,000 Scots-Irish settles who migrated to America in the eighteenth century.  This remarkable group of settlers played a profound, but often unrecognized, role in the shaping of America. James “Jim” Webb traces the history of his people, the challenges they faced, and the qualities they developed that helped to settle the American frontier and define the American character.

This story is both a distinguished work of cultural history and a human drama that speaks straight to the heart of contemporary America. Born Fighting reintroduces America’s most powerful, patriotic, and individualistic cultural group – one too often ignored or taken for granted.

Former navy secretary Webb (Fields of Fire; etc.) wants not only to offer a history of the Scots-Irish but to redeem them from their redneck, hillbilly stereotype and place them at the center of American history and culture. As Webb relates, the Scots-Irish first emigrated to the U.S., 200,000 to 400,000 strong, in four waves during the 18th century, settling primarily in Appalachia before spreading west and south. Webb's thesis is that the Scots-Irish, with their rugged individualism, warrior culture built on extended familial groups (the "kind of people who would die in place rather than retreat") and an instinctive mistrust of authority, created an American culture that mirrors these traits. Webb has a genuine flair for describing the battles the Scots-Irish fought during their history, but his analysis of their role in America's social and political history is, ironically for someone trying to crush stereotypes, fixated on what he sees, in almost Manichaean terms, as a class conflict between the Scots-Irish and America's "paternalistic Ivy League-centered, media-connected, politically correct power centers." He even excuses resistance to the "Northern-dominated" Civil Rights movement. Another glaring weakness is the virtual absence of women from the sociological narrative. Webb interweaves his own Scots-Irish family history throughout the book with some success, but by and large his writing and analysis are overwhelmed by romanticism.
Copyright © Reed Business Information, a division of Reed Elsevier Inc. All rights reserved.

*Starred Review* In telling the story of the Scots-Irish in America as a robust and passionate tale, novelist Webb writes straightforward, no-nonsense, readable history that clips right along while it is also very personal and highly idiosyncratic about a people who, he claims, are largely invisible--taken for granted--to the general public and who, seldom thinking of themselves in ethnic identity terms, mostly don't know their culture. Webb maintains that Scots-Irish attitudes form the bedrock of American society, especially among the working class. Scots-Irish culture has produced American presidents from Andrew Jackson to Bill Clinton, soldiers from Ulysses S. Grant to George Patton, pioneers, preachers, and others whose most common characteristics may be described as fierce individualism, persistent egalitarianism, and a strong sense of personal honor. Perhaps the most visible examples of broad and ongoing Scots-Irish legacy are the fundamentalist Christianity (a potent combination of Scottish Calvinism and headstrong populism) of America's Bible Belt and country music. Webb begins the Scots-Irish saga in Scotland, where, he says, the Scots-Irish character was formed, moves on to the Ulster Scots of what is now Northern Ireland, and follows them to the Appalachians and points beyond as well as through the American Revolution, the Civil War, and up to the present day. Popular history at its finest. June Sawyers
Copyright © American Library Association. All rights reserved

“Born Fighting is a bombshell—or else the most brilliant battle flare ever launched by a book. James Webb reveals the all-but-invisible ethnic group that has created the core beliefs of democracy American-style: our rights come from God, not the Government; all of us are born equal, and “born aristocrats” don’t exist; and tread on either of those two truths, and we’ll fight you down to the last unbroken hyoid bone. The Scots-Irish, for such is their name, have fought all our wars for us, including Vietnam. James Webb was there, and he can count. He has written not only an engrossing story but also an important work of sociological history in the tradition of the great James Graham Leyburn.”
—Tom Wolfe