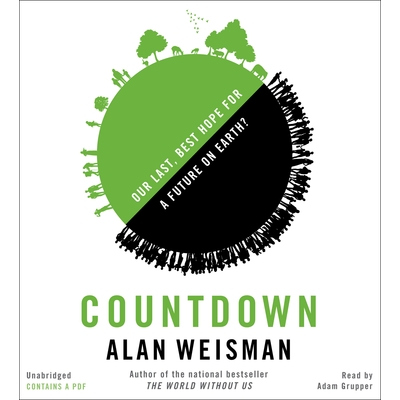 In his bestselling book The World Without Us, Alan Weisman considered how the Earth could heal and even refill empty niches if relieved of humanity's constant pressures. Behind that groundbreaking thought experiment was his hope that we would be inspired to find a way to add humans back to this vision of a restored, healthy planet-only in harmony, not mortal combat, with the rest of nature.

But with a million more of us every 4 1/2 days on a planet that's not getting any bigger, and with our exhaust overheating the atmosphere and altering the chemistry of the oceans, prospects for a sustainable human future seem ever more in doubt. For this long awaited follow-up book, Weisman traveled to more than 20 countries to ask what experts agreed were probably the most important questions on Earth--and also the hardest: How many humans can the planet hold without capsizing? How robust must the Earth's ecosystem be to assure our continued existence? Can we know which other species are essential to our survival? And, how might we actually arrive at a stable, optimum population, and design an economy to allow genuine prosperity without endless growth?

Weisman visits an extraordinary range of the world's cultures, religions, nationalities, tribes, and political systems to learn what in their beliefs, histories, liturgies, or current circumstances might suggest that sometimes it's in their own best interest to limit their growth. The result is a landmark work of reporting: devastating, urgent, and, ultimately, deeply hopeful.

By vividly detailing the burgeoning effects of our cumulative presence, Countdown reveals what may be the fastest, most acceptable, practical, and affordable way of returning our planet and our presence on it to balance. Weisman again shows that he is one of the most provocative journalists at work today, with a book whose message is so compelling that it will change how we see our lives and our destiny.

"Countdown is a gripping narrative by a fair-minded investigative journalist who interviewed dozens of scientists and experts in various fields in 21 countries. He also scoured the literature to deliver not so much a doomsday narrative but a warning followed by the practical solution employed by various countries to get control of their population." -- Wall Street Journal
"Countdown converts globetrotting research into flowing journalism, highlighting a simple truth: there are, quite plainly, too many of us. A world that understands Weisman's words will understand the pressing need for change." -- Bill Streever, author of Cold and Heat
"A frenzied barnstormer of a book.... Countdown is a chaotic stew of big stories, bold ideas and conflicted characters, punctuated by moments of quiet grace--just like our people-packed planet." -- Scientific American
"Weisman offers heart-rending portrayals of nations already suffering demographic collapse... A realistic, vividly detailed exploration of the greatest problem facing our species." -- Kirkus (starred review)
"Weisman's anecdotes and explanations...draw a clear picture.... Countdown asks the hard questions." -- Shelf Awareness
"Weisman's gift as a writer with a love of science is in drawing links for readers on how everything in our world is connected - in this case, population, consumption and the environment.... The pleasure in reading Countdown is in the interplay of interviews with experts and with everyday working people around the world, all trying to figure out the size of family they want." -- Toronto Star
"He makes a strong case for slowing global population growth-and even for reducing overall population numbers-as a prerequisite for achieving a sustainable future...Weisman's book...offers hope... Weisman's emphasis on expanding access to contraception as the next-best strategy is both pragmatic and workable, as past efforts have shown. It is to be hoped that his message may be heeded sooner rather than later." -- Nature
"Spirited descriptions, a firm grasp of complex material, and a bomb defuser's steady precision make for a riveting read... Weisman's cogent and forthright global inquiry, a major work, delineates how education, women's equality, and family planning can curb poverty, thirst, hunger, and environmental destruction. Rigorous and provoking, Countdown will generate numerous media appearances for Weisman and spur many a debate." -- Booklist (starred review)
"Weisman reminds us that when the experts are worried, we should pay attention." -- Los Angeles Times
"[Weisman] found vivid, real-world portraits of what overpopulation portends." -- Men's Journal
"Provocative and sobering, this vividly reported book raises profound concerns about our future." -- Publishers Weekly (starred review)
"Rousing, urgent.... By exploring and integrating the lessons from cultures the world over, Weisman has been able to provide a blueprint that will ultimately benefit the planet as a whole. "Countdown" is a timely, essential, and hopeful work - one that suggests compassion in place of consumption and promises a return to an equilibrium that will prove a veritable windfall for humans, non-humans, and ecosystems alike." -- The Oregonian
"A hugely impressive piece of reportage, a cacophony of voices from across the world." -- Washington Post
"While it is very much an alarming assessment, it is not without some genuine hope...It's a must read for all those who are concerned about the human prospect." -- Robert Walker, president of the Population Institute
"Weisman's stories--from his travel to contemporary Israel and Palestine, where reproducing is a form of warfare, to histories of family planning in Asia and South America--are fascinating and often chilling." -- Slate
"Unflinching and ready for anything, Weisman's Countdown tackles the biggest question facing not only us, but every other living thing on earth. How many people can there be on the earth? Written with extraordinary clarity, without all the arm-waving and doomsaying that seems to kill the conversation, his firsthand tour of the globe offers both worst case scenarios and the most hopeful futures we can imagine." -- Craig Childs, author of Apocalyptic Planet and House of Rain
"Rousing." -- Ihsan Taylor, New York Times Book Review's "Paperback Row"
"Alan Weisman's Countdown is rich, subtle and elaborate. His magisterial work should be the first port of call for anyone interested in the relationship between population and the environment...It's a tightly argued, fast-paced adventure that crosses the plant in search of contrasts." -- Literary Review