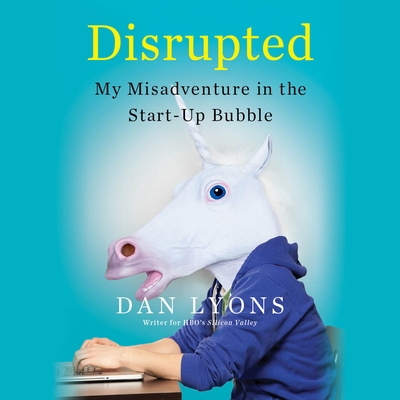 For twenty-five years Dan Lyons was a magazine writer at the top of his profession--until one Friday morning when he received a phone call: Poof. His job no longer existed. "I think they just want to hire younger people," his boss at Newsweek told him. Fifty years old and with a wife and two young kids, Dan was, in a word, screwed. Then an idea hit. Dan had long reported on Silicon Valley and the tech explosion. Why not join it? HubSpot, a Boston start-up, was flush with $100 million in venture capital. They offered Dan a pile of stock options for the vague role of "marketing fellow." What could go wrong?

HubSpotters were true believers: They were making the world a better place ... by selling email spam. The office vibe was frat house meets cult compound: The party began at four thirty on Friday and lasted well into the night; "shower pods" became hook-up dens; a push-up club met at noon in the lobby, while nearby, in the "content factory," Nerf gun fights raged. Groups went on "walking meetings," and Dan's absentee boss sent cryptic emails about employees who had "graduated" (read: been fired). In the middle of all this was Dan, exactly twice the age of the average HubSpot employee, and literally old enough to be the father of most of his co-workers, sitting at his desk on his bouncy-ball "chair."

Mixed in with Lyons's uproarious tale of his rise and fall at Hubspot is a trenchant analysis of the start-up world, a de facto conspiracy between those who start companies and those who fund them, a world where bad ideas are rewarded with hefty investments, where companies blow money lavishing perks on their post-collegiate workforces, and where everybody is trying to hang on just long enough to reach an IPO and cash out.

With a cast of characters that includes devilish angel investors, fad-chasing venture capitalists, entrepreneurs and "wantrapreneurs," bloggers and brogrammers, social climbers and sociopaths, Disrupted is a gripping and definitive account of life in the (second) tech bubble.

"Disrupted by Dan Lyons is the best book about Silicon Valley today.... Simultaneously hilarious and terrifying, Disrupted is an insider's look at a technology start-up from an outsider's perspective. Yet it's more than a chronicle of Lyons' tenure at one company, but a broader commentary on a business culture that often appears to be built on financial quicksand."—Los Angeles Times
"Read this book if you work or invest in tech and, in particular, tech startups. And not just for the tales of corporate intrigue, hypocrisy, and ridiculousness that have caused HubSpot and its allies to get so hot under their collective collar.... [Lyons] makes a strong case for how all of that young labor, when increasingly wrapped up into an over-arching 'corporate culture,' creates subtle age discrimination that these employees won't recognize for years to come. This not only is a real (albeit virtually ignored) issue at tech companies today, but is going to become a much larger one as digital natives continue to age."—Dan Primack, Fortune.com
"Disrupted...offers an unvarnished insider's view of a tech startup.... That makes the book a must-read for anyone who works at a tech startup or wants to create one, in the same vein that books like One L became mandatory reading for soon-to-be law students.... A delightful portal into the world of a tech startup."—Lilly Rockwell, Austin American-Statesman
"Dan 'Fake Steve' Lyons runs such a savage burn on his ex-employer, HubSpot, that the smoke can be seen clear across the country in Silicon Valley. Disrupted is fun, compulsively readable and just might tell us something important about the hypocrisy and cult-like fervor inside today's technology giants."—Brad Stone, New York Times-bestselling author of The Everything Store
"Hilarious and eye-opening."—Business Insider
"Disrupted provides an eye-opening and gut-busting account of the maddening world of startup excess, hubris and groupthink from the unique perspective of a prominent technology reporter and satirist who was inexplicably hired and given a front row seat to the lunacy."—Mashable
"Using his trademark wit and clear-eyed analysis, Dan Lyons has delivered a much-needed referendum on the current state of Silicon Valley. In wildly entertaining fashion, Disrupted explores the ways in which many technology companies have come to fool the public and themselves. Lyons has injected a dose of sanity into a world gone mad."—Ashlee Vance, New York Times-bestselling author of Elon Musk
"It would be incomplete to classify Disrupted as merely an Office Space-esque critique of Corporate America. It also serves as social commentary about the way that more senior employees are viewed and valued in a hyper-aggressive startup culture hell bent on an IPO. In other words, you will both laugh and think. I consumed the book in less than a day and highly recommend it to people curious about what could very well happen to them."—Phil Simon, The Huffington Post
"Hilarious... A must-read, not just in the real Silicon Valley but also on Wall Street... A highly entertaining, highly troubling tale of greed, graft, possible extortion, marketing nonsense, #content, incompetent bozos, investor hype, the impossibly wealthy and a man just looking to make his cut. That, folks, isn't just the Silicon Valley dream. It's the American dream."—Chris Taylor, Mashable ("Geek Book of the Week")
"[Lyons's] artful reporting from the inside makes for a funny and thoughtful account of the current culture surrounding technology startups. But in addition to entertainment, Lyons's book is also flush with analysis of those the entrepreneurs that founded these companies and the myriad firms that fund them."—The Atlantic

"The tech industry needs more writers like Lyons who are willing to probe its hyperbole, the ridiculous valuations, injustices and inconsistencies."—MarketWatch
"Laugh-out-loud funny."—Newsweek
"A juicy read.... Disrupted is worth a read for its exploration of startup culture and its effect on labor....The book made me fearful of the fact that startup culture--from Google-style perks and zero work-life balance to corporate cheerleading and a cult-like devotion to the 'mission'--has become aspirational to many corporations. The ways in which the worst parts of startup culture benefit managers and investors while making workers disposable are particularly scary, and Lyons attacks that issue in a compelling way.... Disrupted is a foil to all those awful books that make sweeping generalizations about how to work with millennials."—Erin Griffith, Fortune.com
"Dan Lyons goes deep inside a company that uses terms like 'world class marketing thought leaders' to show us how ridiculous, wasteful, and infantile tech start-ups like this can be. And best of all, Lyons does this with his trademark pejorative and hilarious tone."—Nick Bilton, New York Times technology columnist
New York Times bestseller
Wall Street Journal bestseller
San Francisco Chronicle bestseller
"An often-delightful tour through startup culture... But there are parts of his book that should send shivers down the spine of anyone who uses the Internet."—Harvard Business Review
"This humorous and well-crafted memoir is part of a proud literary tradition: the disgruntled ex-employee tell-all. It's a genre that includes classic nonfiction accounts such as John DeLorean's On a Clear Day You Can See General Motors (detailing the carmaker's decline in the 1970s) and Michael Lewis's Liar's Poker (describing life at Salomon Brothers during the 1980s boom)."—Harvard Business Review
"Troubling but funny ... [a] coolly observant book ... [with] a splendidly weird coda ... You couldn't have written a tastier ending, even for HBO."—Dwight Garner, New York Times
"Scathingly funny .... Like the show 'Silicon Valley,' Disrupted nails the workings of spastic, hypocritical, delusional tech culture."—New York Post
"Lyons finds the right company, if only for the raw material that he, a seasoned satirist, spins into gold.... But the book is not just a chronicle of the tech bubble's silly quirks.... Lyons uses the lens of his growing disillusionment to focus a broader critique of Silicon Valley."—Financial Times
"As the writer behind the satirical blog Fake Steve Jobs, [Lyons] could not have imagined a place so ripe for parody as HubSpot. Every detail of the hip office space, incompetent management, and delusional workforce described by Lyons in his hilarious and unsettling exposé is like something out of a scripted comedy (the author writes for HBO's Silicon Valley) ... An exacting, excoriating takedown of the current startup 'bubble' and the juvenile corporate culture it engenders."—Kirkus Reviews