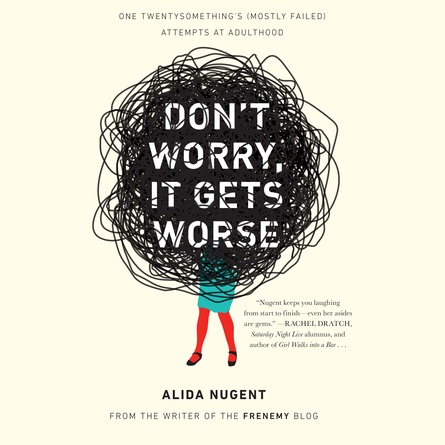 in stock
Don't Worry, It Gets Worse
(Unabridged)
add to wishlist give as a gift Play Sample

With a college degree in one and a drink in the other, Alida Nugent was eager to give up her parties and all-nighters for "the real world." She discovered, under ...

With a college degree in one and a drink in the other, Alida Nugent was eager to give up her parties and all-nighters for "the real world." She discovered, under a pile of bills, laundry, and three-dollar bottles of wine, that the post-college life wasn't as glamorous as she imagined. It also became very clear that she had no idea what she was doing. But, really, what twenty-something does?

In Don’t Worry, It Gets Worse, Nugent shares what it takes to make the awkward leap from undergrad to "mature and responsible adult that definitely never eats peanut butter straight from the jar and considers it a meal.” Nugent documents, with a little snark, and a lot of heart to formative moments of being a twenty-something - from apartment searching on the black hole known as Craigslist to the creative budgeting allowing one to pay student debt and still enjoy happy hour. Based on her popular Tumblr blog, The Frenemy, Don’t Worry, It Gets Worse is a love note to boozin’, bitchin’ ladies everywhere.

Poor Nugent. Reality has hit her—and hard. Armed with a degree from Emerson College (and thousands in unpaid loans), the snarky twentysomething must now figure out how to make her way in the world. It certainly doesn’t help matters that she’s moved back in with her parents. Seized by panic attacks, Nugent spends her days looking for meaningful work and a place to live. Along the way, she joins an online-dating service, but the “match-dot.coms” of the world aren’t typically inclined toward the offbeat, so she ends up with potential suitors who are hopelessly dull. Nugent, creator of the comedy blog The Frenemy, is committed to helping quirky girls feel good about themselves. This wry offering is at its best when she focuses on her own struggles to that end, including a longtime obsession to be thin. She likes to eat too much, Nugent says: “So yes, I have a tummy. I don’t always love it. Sometimes I really hate it. But I am going to acknowledge it, and I’m going to deal with it.” --Allison Block (Booklist)