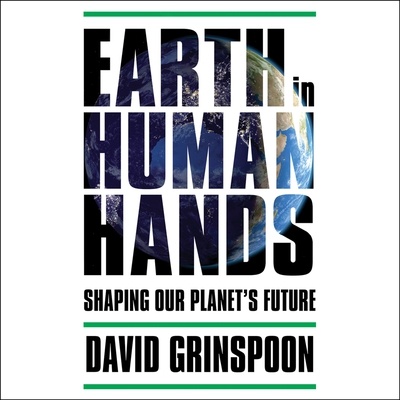 "David Grinspoon's books are always high-spirited, insightful, elegantly-written, and full of fascinations, but EARTH IN HUMAN HANDS is especially so, because he focuses on our home planet and exciting/dangerous new age, criss-crossing the globe and traveling deep into the unknown reaches of space, where other lifeforms may be facing their own planetary challenges. I'm sure readers will love voyaging through the cosmos with him again, as I do."—Diane Ackerman, New York Times bestselling author of The Human Age: The World Shaped by Us and The Zookeeper's Wife: A War Story
"LONELY PLANETS is a Lonely Planet guide to the universe, packed with useful information served up with a wry, amusing twist....He does it all in a breezy, engaging style unlike anything you'll find in most popular science books."—Dallas Morning News on Lonely Planets
"Earth in Human Hands is a remarkable synthesis of natural history, planetary science, extinction histories, Earth's climate and the human effect on the world...If we do it right, the 21st century won't be the peak of human achievement, but rather our initial foray into a brilliant, uncertain but full-of-potential future."—Forbes
"Astronomer and space advocate Grinspoon pulls lots of facts, hypotheses, and beliefs together in this entertaining consideration of the likelihood of encountering extraterrestrial life...Fun to read, Grinspoon comes across like a buddy in a bar, trying out ideas over a beer or few. He deserves a large readership."—Booklist on Lonely Planets
"David Grinspoon is an entertaining and insightful writer, and he takes us through a delightful intellectual romp across the universe, through our solar system, witnessing Earth's evolution over geologic time. He gives us an astronomer's-eye view of our current global environmental crisis, helping us see our predicament through the lens of time and space, which gives us a far better perspective-- especially on issues like climate change. I strongly recommend this book to folks who are scientifically curious, and to those who want to hear a different take on our current environmental challenges. You won't be disappointed."—Jonathan Foley, Director, California Academy of Sciences
"A beautiful and detailed overview of the ways we must change our thinking if we want to truly understand the transformation in our midst."—Adam Frank, NPR.com