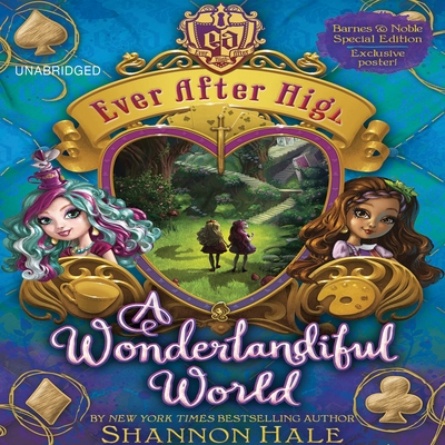 Princes, princesses, and wicked queens-oh my! Your happily forever after starts now in this totally legendary third book by bestselling author Shannon Hale!

Praise for Ever After High: Storybook of Legends:
"What's a girl to do when her mother is the fairy-tale world's worst evil queen? Follow in her footsteps? Never!

At the beginning of this series opener, it's the first day of school at Ever After High, where the offspring of famous fairy-tale characters begin their second year. For these students, Legacy Day beckons, at which time each will sign the Storybook of Legends and take the pledge to replay their parents' roles. Once they ink their names, the stories they spring from will be safely preserved, but if one does not, rumors have it that the tale-as well as the student-will vanish in a posthaste "poof." Most are all aflutter to fulfill their requisite destinies, but Raven Queen, the daughter of the exquisitely wicked Evil Queen, doesn't have an evil bone in her body. If she signs, she is duty-bound to poison Apple White (Snow's daughter), but she wants to create her own future. When Raven discovers that two fairy-tale sisters long ago broke their pledge, she enlists the sleuthing skills of her wacky roommate, Madeline (as in Hatter), and Apple herself to unravel the sisters' ultimate fate. Hale has created a delightfully revamped, newly fashioned cast of fairy-tale characters (and in hipper clothes no less-unsurprising, as the book introduces a new line of Mattel dolls) and gives readers a terrific protagonist to root for. Magic and humor abound, and fairy-tale wordplay flies.