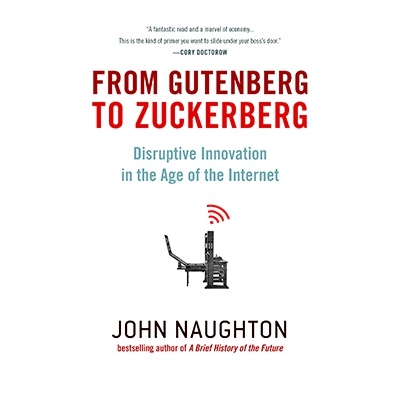 From Gutenberg to Zuckerberg is a clear-eyed history of one of the most central, and yet most taken-for-granted, features of modern life: the internet. Once a technological novelty and now the very plumbing of the Information Age, the internet is something we have learned to take largely for granted. So, how exactly has our society become so dependent upon a utility it barely understands? And what does it say about us that this is so?

While explaining in highly engaging language the way the internet works and how it got to be the way it is, technologist John Naughton has distilled the noisy chatter surrounding the technology's relentless evolution into nine essential areas of understanding. In doing so, he affords readers deeper insight into the information economy and supplies the requisite knowledge to make better use of the technologies and networks around us, highlighting some of their fascinating and far-reaching implications along the way.

PRAISE FOR FROM GUTENBERG TO ZUCKERBERG
"A fantastic read and a marvel of economy.Â .Â . This is the kind of primer you want to slide under your boss's door."—Cory Doctorow, New York Times bestselling author and co-editor of Boing Boing
"An accessible guide to the internet... Naughton draws on more than two decades of study to explain how the internet works and the challenges and opportunities it will offer to future generations."—The Times
"[Naughton is] willing to take a stab at the unpredictable.... Naughton warns of two possible outcomes of our networked futures envisioned by the English writers George Orwell and Aldus Huxley--one a prison of our fears under the constant, watchful eye of Big Brother; the other in which our own sense of self gets lost in a sea of our own self-indulgence."—David Siegfried, Booklist
"John Naughton's easy journalistic style gives me all the information I sort of knew and facts I hadn't joined up."—Joan Bakewell, New Statesman