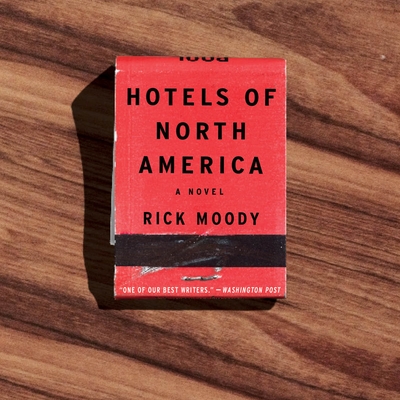 "This is Moody's best novel in many years...a book of irony and wit and heartbreak." --Dwight Garner, New York Times

From the acclaimed Rick Moody, a darkly comic portrait of a man who comes to life in the most unexpected of ways: through his online reviews.

Reginald Edward Morse is one of the top reviewers on RateYourLodging.com, where his many reviews reveal more than just details of hotels around the globe--they tell his life story.

The puzzle of Reginald's life comes together through reviews that comment upon his motivational speaking career, the dissolution of his marriage, the separation from his beloved daughter, and his devotion to an amour known only as "K." But when Reginald disappears, we are left with the fragments of a life--or at least the life he has carefully constructed--which writer Rick Moody must make sense of.

An inventive blurring of the lines between the real and the fabricated, Hotels of North America demonstrates Moody's mastery ability to push the bounds of the novel.

"Moody offers both a subtle psychological portrait and even the hint of a mystery-'what I would call the mystery of Reginald Morse,' he writes with game-is-afoot breathlessness in an afterword. It's a slyly delightful turn, considering all we've learned about Reginald and his views....Lively and lightly written....A sardonic but entertaining look at modern American life." —Kirkus
"Moody's prose, as befits the writer's writer he is, possesses a sinuous, entangling power. His long, far-ranging sentences beguile with surprises and the sheer beauty of craftsmanship. He's also funny...The novel contains many moments of profound insight and pointed comedy...[Moody's] decadent prose hits the mark."—Claire Fallon, Huffington Post
"The novel's prose has a slapdash swagger . . . Moody endows Reginald with a neo-Nabokovian 'fancy prose style' that engenders much of the novel's humor. The unexpected thing is how poignant some of his reflections can be, whether they're introspective or outward observations . . . With Hotels in North America," Moody portrays a man who can't settle on who he wants to be, dwelling in a tired country that no longer knows what it is . . . While Moody is obviously lampooning the self-help bromides that are part of Reginald's motivational-seminar arsenal, there's a vein of sincerity in play here, too . . . The wastrel waywardness of the novel is energizing, and its wrestling with the irresolvable loose ends of personality has a wry and powerful melancholy." —Michael Upchurch, San Francisco Chronicle
"Moody swings around on paragraphs like the chandelier you ride on at the end of a party."—Alexander Chee, The New Republic
"Moody's clever latest explores the narrative possibilities fo online reviews, that form of democratic criticism crucial to the success of everything from toaster ovens to literature itself....The online reviews look back over a period of roughly forty years, from Morse's childhood stay at the Plaza Hotel in 1971 to a visit to a bedbug-infested Bronx motel in 2014. In his delightful archness and strategic reticence, Morse is reminiscent of the epicurean narrator of John Lanchester's The Debt to Pleasure.... This is an amusing, vibrant narrative." —Publishers Weekly
"Throughout Hotels of North America, Rick Moody serves up a blend of sophistication and melancholy . . . This novel, brief as it is, allows the author his fullest range of play to date . . . Hotels often brings off paradoxes: a sweet stay that turns to a bitter memory, or a farce that tumbles into an abyss of grief. Most of the funny business derives from an unsparing honesty about the American hardscrabble . . . This book is full of magic tricks."—John Domini, Philadelphia Inquirer
Praise for Hotels of North America

"This is Moody's best novel in many years. It's a little book, a bagatelle, but it's a little book of irony and wit and heartbreak. It is insightful...In Hotels of North America [Moody] eases back on the throttle, and his engine begins to purr...This novel's elastic format--short hotel reviews--gives Moody a lot of room to improvise and play, and play he does. He is terrific."

—Dwight Garner, New York Times
"Rick Moody's latest work, Hotels of North America, is an entertaining and frenetic epistolary-like novel that follows the peregrinations of protagonist Reginald Edward Morse . . . He is almost always very funny . . . In Moody's deft hands, hotels become a kind of purgatory for Morse to reflect upon his many sins . . . The utter disaster that is Reginald Edward Morse makes for uniquely compelling narration. The most banal amenities become life rafts to a man on the cusp of soul death . . . Above all, Morse has a profound gift for observational humor. Hotels of North America is filled with the kinds of jokes and big-picture insight found in the most entertaining criticism . . . Moody triumphs in writing a little book that raises such big questions." —Eugenia Williamson, Boston Globe
"Evocative of Nabokov and Borges, Moody's new novel, Hotels of North America, presents...the slow revelation of [Reginald Morse's] chief sorrows and regrets. His has been a bumbling life of continual indignities and clutch failures...Funny and companionable in his at times repellent way, Morse is a snob in embarrassed circumstances, often defensively misanthropic, lordly even in self-confessed defeat...Like Rick Moody, an ironized version of whom contributes an afterword, Morse is a fluid writer of often careening musicality (a taxonomy of the matrimonial bed as a place of actual or elusive sleep is particularly alive), and the reviews employ some of Moody's signatures...Along with laughs...there are several moving, hollowed-out mediations here. You probably won't come to love Reginald Morse, but quite likely he'll earn your sympathy."
—Dylan Hicks, Minneapolis Star Tribune
"The way Moody illustrates the depth of his narrator, Reginald Morse, marks the book as one of the year's most interesting reads."—Paste
"Throughout the novel, Morse's shattered life takes on ever sharper edges, as he plows into the desultory American landscape with all the eagerness of a middle-aged man of waning prospects...Moody's sweet spot in Hotels of North America is quotidian detail tinged with some deeper existential unease: Fear and Trembling at the Holiday Inn, if you will. Over and over, with an impressive attention to the nuances of the hospitality industry, Moody manages to suffuse your average roadside lodging with a kind of life-sapping dread...This is a very literary novel, cleverly constructed and written in an arch, clever, very literary voice, at once mannered and unrestrained, like an aging patrician after his third drink...But if Moody can sometimes untether himself from plot and character, it is because he seems more interested in existential truths than novelistic conventions. This novel is short and plangent and...frequently beautiful. If it were a hotel room, you'd give it four stars."—Alexander Nazaryan, Newsweek
"The eloquent author of [these] reviews frequently deviates into full-on brilliance....Reginald is undeniably funny....This book had me giggling so often and so loudly that I began to annoy the person with whom I dwell. Reading Hotels of North America as I did, over the course of two days, seemed the perfect dose of humor and insight. All comic novels should aspire to such heights....My interest and investment only deepened as the novel wore on, as Moody revealed not only a man, but an entire culture through these scattered fragments that mirror the workings of memory and of read day-to-day living. Four out of four stars."
—Drew Nellins Smith, The Millions
"Moody at his most inventive, most playful, most bitter and biting and cruel"—Jason Sheehan, NPR
"Formally daring, often very funny, and surprisingly moving. It should earn Moody new fans from a millennial cohort that was still in diapers back when he was basking in his early critical acclaim...Part of what makes Hotels of North America as breezy as it is rewarding is its structure, which in our era of digital discourse manages to feel both unorthodox and perfectly familiar. The story unfolds as a series of online reviews for the Web site RateYourLodging.com, all of which have been submitted by one Reginald Edward Morse, a reviewer of such entertaining prolixity and discursive majesty that the adjective 'Nabokovian' immediately comes to mind. (It will come to mind more than once throughout the novel.)"—Jeff Turrentine, Washington Post

"Morse is both a reliable and unreliable narrator, and a mesmerizing one. As he tries to put the best face on a crumbling career and unraveled marriage, he is at turns comic and heartbreaking...From one review to the next, Moody effectively shows how a one-on-one relationship with the blank screen of a blog post can seduce a writer into surprising levels of sharing with his audience...It's hard not to be touched by Morse and his eccentricities. You find yourself wishing him well, and are glad you knew him, however briefly."
—Carol Iaciofano, The Artery, WBUR
"Hotels of North America has its charming moments, and when the author lets his character be vulnerable, the results are extraordinary."—Michael Schaub, Los Angeles Times
"In this entertaining critique of contemporary culture, written with vibrancy and wit, Moody not only provides a nuanced portrait of an Everyman but also deploys his playful yet artful approach to language."—Booklist
"Hotels of North America purports to be a non-chronological collection of Morse's best reviews from 1996 to 2014, and his attempted descriptions of the lonely rooms offered by American budget travel provide the reader with fragmentary glimpses of a tragicomic life - one furiously examined and fleetingly lived.Other reviewers have noted the Nabokovian style of Moody's novel, and Morse's reviews bear a resemblance to the footnotes in Pale Fire, where the absurd delusions and digressions of the narrator start to eclipse their scholarly tone. Hotels suggests that the comedy of Pale Fire can now be found online, where personal and professional voices fluidly intermingle, offering writing that has the potential to go anywhere and sometimes nowhere as well. All the doors are open and there are always vacancies. Four stars."—Julian Novitz, The Listener (New Zealand)

"Rick Moody's take on the midlife crisis is such a familiar yet nuanced tale told in such an intriguing, inventive way that it feels fresh-or at least worthwhile . . . Reginald and his frequent companion, referred to only as K., are low-level scam artists, and a couple of their escapades are set pieces of high comedy . . . Even when he's in the doldrums, even when he's staying at the sketchiest motel in the most terrifying of neighborhoods, Reginald's wry, articulate invoicing of his failures (alongside those of the motel) is never grim enough to be off-putting . . . Hotels of North America is frequently very funny . . . It's a strangely touching story of disillusionment, loneliness, and regret." —Jill Wilson, Winnipeg Free Press