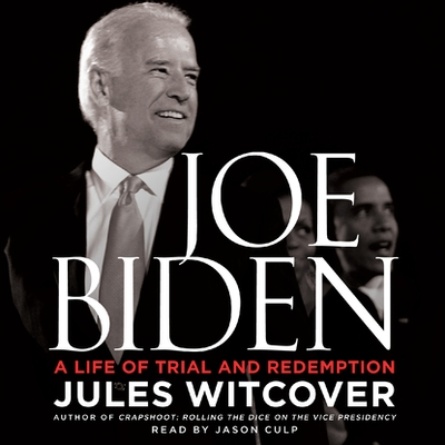 "When I got knocked down by guys bigger than me . . . [my mother] sent me back out and demanded that I bloody their nose so I could walk ...

"When I got knocked down by guys bigger than me . . . [my mother] sent me back out and demanded that I bloody their nose so I could walk down the street the next day."—Joe Biden

In this, the first definitive biography of Vice President Joe Biden, renowned journalist Jules Witcover examines the fascinating life of a man who, with his tenacity, outspokenness, and charming smile, has shaped Washington politics for the past forty years and who now serves as the forty-seventh vice president of the United States.

Raised in the working-class towns of Scranton, Pennsylvania, and Wilmington, Delaware, and with lackluster grades in school and no particular goals other than to play sports or, fleetingly, to become a priest, Biden shocked the nation in 1972 when he became one of the youngest elected senators in U.S. history. From that point forward, he carved a legacy for himself as one of the most respected legislators in the country. Biden's record in Congress was impressive. He chaired three Senate committees, confronted Slobodan Miloševic head-on as a war criminal, and conducted the confirmation hearings of Supreme Court justices. After voting for the 2002 Senate resolution to use force in Iraq, he later called for its repeal and became an outspoken critic of the conduct of the war.

Yet for all of Biden's achievements in the Senate, his life has been filled with tragedy and countless challenges. Within two months of being elected in 1972, Biden lost his wife, Neilia, and his young daughter in a tragic accident—a loss that brought him to the nadir of despair and shook his resolve to stay in politics. And even after Biden vowed to continue his career, his tenure was marked by two brain aneurysms and career-threatening verbal gaffes. Then, after being considered among the front-runners in the 1988 Democratic presidential primaries, Biden was accused of plagiarism for a speech he made at the Iowa State Fair. He dropped out of the race to the sounds of Washington pundits chattering that the presidency would never be his. Through it all, Biden survived and ran—and eventually dropped out—again in the 2008 primaries. But even with this defeat, Barack Obama recognized Biden's vast experience in domestic and foreign affairs, and selected him to be his running mate.

Joe Biden: A Life of Trial and Redemption is based on exhaustive research by one of Washington's most prolific journalists. In drawing on numerous exclusive interviews with Biden's confidants and family members, as well as President Obama and Vice President Biden, Witcover has gone beyond conventional biography to track the forces that have shaped a man who, with his plainspoken style and inspiring life story, has resonated with millions of Americans and whose work is now influencing the Obama-Biden administration and shaping America.