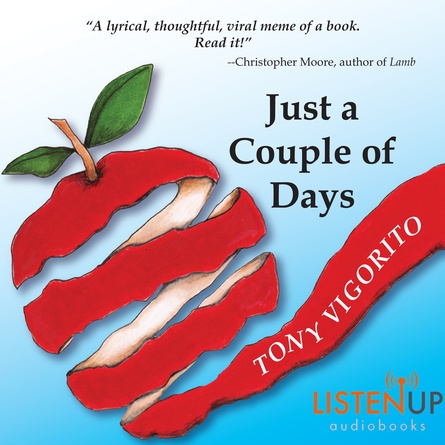 "Just a Couple of Days may be the most unusual, the most original novel I have ever read." - Tom Robbins

"Just a Couple of Days may be the most unusual, the most original novel I have ever read." - Tom Robbins

Join cult favorite Tony Vigorito in his inventive underground hit chronicling the party at the end of time. A mischievous artist kicks off a game of graffiti tag on a local overpass by painting the simple phrase, “Uh-oh.” An anonymous interlocutor writes back: “When?” Someone slyly answers: “Just a couple of days.” But what happens in just a couple of days? Professor Blip Korterly is arrested, his friend Dr. Flake Fountain is drafted into a shadow-government research project to develop the ultimate biological weapon, and an accidental outbreak turns into a merry-hearted, babble-inducing apocalypse that will either destroy humankind or take it to the next step in evolution.

"Just a Couple of Days may be the most unusual, the most original novel I have ever read.  It reminds me of my own first novel, Another Roadside Attraction, in that it almost completely defies what we've been taught that a novel ought to be... If philosophical ideas were harpoons, Tony Vigorito could turn every whale in Ahab's ocean into floating pincushions  --  and have enough left over to pop Ted Cruz's piñata."
--Tom Robbins

"A lyrical, thoughtful, viral meme of a book. Read it!"
—Christopher Moore

"Just a Couple of Days. From this seemingly harmless bit of highway graffiti springs Tony Vigorito's inventive debut novel, a madcap adventure of a sinister government plot and an apocalyptic vision worthy of Kurt Vonnegut... After being conscripted as the genetics expert for a secret military project, Dr. Flake Fountain, a molecular geneticist at a major university, is thrust into the (literally) underground development of a biological agent with the power to disable enemies’ symbolic capacity, leaving them unable to communicate. But Just a Couple of Days is no mere sci-fi daydream. Vigorito’s research is impressive, and the narrative pops with linguistic acrobatics reminiscent of Tom Robbins… Vigorito engages in consistently dazzling wordplay, and readers will eagerly follow the narrative as it moves beyond the conventional boundaries of storytelling… An underground cult classic."
—Kirkus Reviews