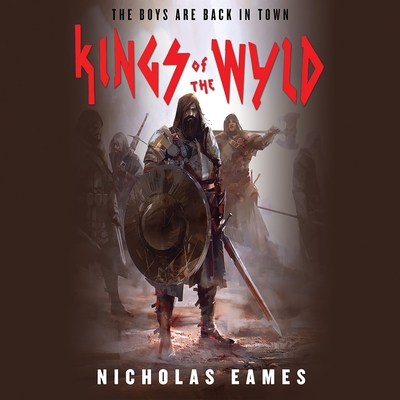 in stock
Kings of the Wyld
(Unabridged)
add to wishlist give as a gift Play Sample
GLORY NEVER GETS OLD. Clay Cooper and his band were once the best of the best, the most feared and renowned crew of mercenaries this side of the Heartwyld. Their ...
add to cart
GLORY NEVER GETS OLD.

Clay Cooper and his band were once the best of the best, the most feared and renowned crew of mercenaries this side of the Heartwyld.

Their glory days long past, the mercs have grown apart and grown old, fat, drunk, or a combination of the three. Then an ex-bandmate turns up at Clay's door with a plea for help--the kind of mission that only the very brave or the very stupid would sign up for.

It's time to get the band back together.

"Kings of the Wyld took me back to my Dungeons and Dragons days. It has well-crafted characters long past their best but still fighting, non-stop fantasy action and welcome touches of humor. Great reading!"—Ian Irvine
"Brilliant debut novel... Eames has cranked the thrills of epic fantasy up to 11... Moreover, the plot is emotionally rewarding, original, and hilarious. Eames clearly set out to write something fun to read, and he has succeeded spectacularly."—Publishers Weekly (starred review)
"Absolutely awesome. If the Beatles held a concert tomorrow (with all the necromancy required for that to happen), it still wouldn't be as good a 'getting the band back together' story as this. Full of heroes, humor, and heart."—Jon Hollins
"An outstanding debut which will make you laugh and cry and hold your breath. This is a book that has it all."—K. J. Parker
"Nicholas Eames brings brazen fun and a rock & roll sensibility to the fantasy genre."—Sebastien de Castell
"A promising, fast-paced debut that balances classic quest fantasy with modern sensibilities and liberal doses of humor. Huzzah!"—Alex Marshall