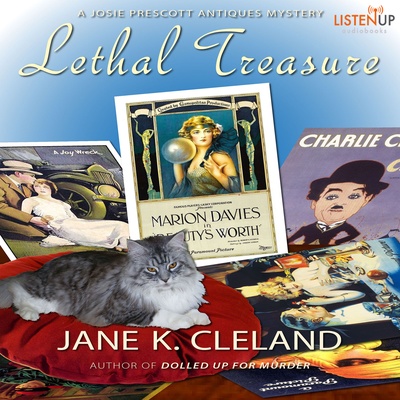 For antiques dealer Josie Prescott, an abandoned storage unit is the perfect place to find some killer treasure, but finding a dead body amongst the wares is more than she ...

For antiques dealer Josie Prescott, an abandoned storage unit is the perfect place to find some killer treasure, but finding a dead body amongst the wares is more than she bargained for With Valentine's Day a week away and the sun sparkling on the fresh-fallen snow in Rocky Point, New Hampshire, it is the perfect day for antiques dealer Josie Prescott to pursue her newest source of unexpected treasures―the contents of abandoned storage units sold at auction. A crowd gathers at the storage facility, including the owner of a local interior design store, Henri Dubois, who bids against a man who is new to the local auction scene. Josie is thrilled with her win, a small unit filled with Depression-era glassware and stunning vintage jewelry. The unit won by Henri includes hand-painted silent movie posters, which he eagerly hands over to Josie for appraisal. The next morning, Josie receives a frantic call from Henri's wife and learns that he never made it home. When the police open Henri's storage unit they find him dead amidst a jumble of objects. Was he killed over one of the objects? Is his wife hiding secrets that led to his death? And who was the stranger who bid against Henri? The police turn to Josie's antiques expertise and she discovers more than provenance―she uncovers a murderer. Jane K. Cleland's Lethal Treasure is a page-turning addition to her beloved Josie Prescott mystery series, with the fascinating antiques details and devilishly clever mystery plot that fans adore and newcomers will love.