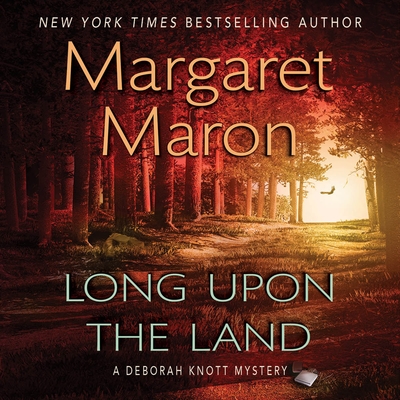 LONG UPON THE LAND

On a quiet August morning, Judge Deborah Knott's father Kezzie makes a shocking discovery on a remote corner of his farm: the body of a man bludgeoned to death. Investigating this crime, Deborah's husband, Sheriff's Deputy Dwight Bryant, soon uncovers a long-simmering hostility between Kezzie and the slain man over a land dispute. The local newspaper implies that Deborah's family may have had something to do with the murder-and that Dwight is dragging his feet on the case.

Meanwhile, Deborah is given a cigarette lighter that once belonged to her mother. The cryptic inscription inside rekindles Deborah's curiosity about her parents' past, and how they met. For years she has wondered how the daughter of a wealthy attorney could have married a widowed, semi-illiterate bootlegger, and this time she's determined to find the answer.

But why are Deborah's brothers so reluctant to talk about the dead man? Is the murder linked to Kezzie's illegal whiskey business? And could his courtship of Deborah's mother have something to do with the bad blood between the two families? Despite Deborah's promise not to interfere in Dwight's work, she cannot stop herself from doing everything she can to help clear her brothers and her father from suspicion . . .

In DESIGNATED DAUGHTERS, practically the whole clan shows up at the hospice where Aunt Rachel has interrupted the process of dying to deliver a rambling account of all the things that have been on her wandering mind. It's quite a lovely deathbed aria, narrated in the honeyed accents of the region. But someone must have feared Aunt Rachel might divulge a buried secret because that someone creeps into her room and smothers her with a pillow.

Maron knows how to adorn a solid murder mystery with plenty of ancillary entertainments. But her broader theme involves the way families flourish when they work together for the common good. While there are charming scenes of group projects like building a pond shed and assembling a bluegrass band, the clan members Maron really cherishes are those who devote themselves to caring for the elders of the family. Living saints they are, every last one of them.
—New York Times Book Review
Praise for DESIGNATED DAUGHTERS:

In MWA Grand Master Maron's outstanding 19th mystery featuring judge Deborah Knott of North Carolina's Colleton County (after 2012's The Buzzard Table), Deborah's elderly aunt, Rachel Morton, lies near death in a hospice. Rachel attracts a crowd of friends and relatives as she talks of "babies, fires, and unpaid debts, of someone who beat his wife and of cowbirds and vegetables and broken jars." A distraction allows a killer enough time to slip into Rachel's room and smother her with a pillow, thus ending her ramblings, which apparently concealed deadly secrets. Unraveling those secrets-some 60 years old-is a slow, difficult process with lots of suspects among friends and family. Maron achieves a delicate balance as she explores differences between mistakes, sins, and crimes, and shows that justice is not always arrived at by conventional means. Humor (e.g., Deborah outfoxes an unscrupulous auctioneer) and social issues (e.g., the difficult role of caregivers to the elderly) add to the warmth of a large family with all its foibles, squabbles, and quirks.—Publishers Weekly (Starred Review)
Praise for DESIGNATED DAUGHTERS:

When Judge Deborah Knott gets a call from the convalescent home about her Aunt Rachel, she expects to hear the worst. She arrives to find her aunt awake and telling stories from her past, including some that are new to Deborah. Yet within hours Rachel is dead, and it is obvious that she was murdered. While Deborah and her husband, sheriff's deputy Dwight Bryant, investigate, her family becomes embroiled in a dispute with a dirty antiques dealer. Alternating viewpoints between Deborah and Dwight, Maron weaves family threads together with current events that leave the reader wanting to know more about the Knott family tree.

Verdict: The author's 19th series outing (after The Buzzard Table) offers loyal fans a fresh look at her expansive family and community. Readers will savor the slow-paced Southern culture and layered story. Maron was named a Grand Master by the Mystery Writers of America in 2013.—Library Journal (Starred Review)
Praise for DESIGNATED DAUGHTERS:

[four stars] Maron is still going strong with the 19th installment in her Deborah Knott series. DESIGNATED DAUGHTERS is a solid mystery where Southern charm meets murder. Maron delves into some social issues of today, and readers can expect a small-town family atmosphere with a lot of heart. Judge Deborah Knott's beloved Aunt Rachel is expected to pass away at any moment--but she wakes up surrounded by family and friends and begins to reminisce as if she were a young woman again. The Knott family's happiness at Rachel's great improvement is short lived when she is smothered with a pillow shortly thereafter. As Deborah and her husband, Sheriff's Deputy Dwight Bryant, look into what happened, their path continues to cross with a list of unlikely suspects. The pair soon realizes that the motive for murder was a secret told during Aunt Rachel's mixed-up ramblings before her death--a secret worth killing for.—RT Book Reviews