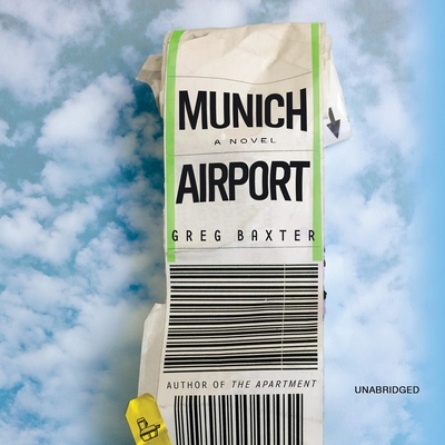 in stock
Munich Airport
(Unabridged)
add to wishlist give as a gift Play Sample
"A masterwork of minimalism." --Entertainment Weekly From the critically acclaimed author of The Apartment comes a powerful, poetic, and haunting exploration of loss, love, and isolation, now available ...
add to cart
"A masterwork of minimalism." --Entertainment Weekly

From the critically acclaimed author of The Apartment comes a powerful, poetic, and haunting exploration of loss, love, and isolation, now available in paperback.

An American living in London receives a phone call from a German policewoman telling him the nearly inconceivable news that his sister, Miriam, has been found dead in her Berlin apartment-from starvation. Three weeks later the man, his father, and an American consular official named Trish find themselves in the bizarre surroundings of a fogbound Munich Airport, where Miriam's coffin is set to be loaded onto a commercial jet and returned to America.

Greg Baxter's bold, mesmeric novel tells the story of these three people over the course of three weeks, as they wait for Miriam's body to be released, grieve over her incomprehensible death, and try to possess a share of her suffering--and her yearning and grace.

With prose that is tense, precise, and at times highly lyrical, MUNICH AIRPORT is a novel for our time, a work of richness, gravity, and even dark humor. Following his acclaimed American debut, MUNICH AIRPORT marks the establishment of Greg Baxter as an important new voice in literature, one who has already drawn comparisons to masters such as Kafka, Camus, and Murakami.

"It is precisely this sort of subversion, along with the author's shimmering prose, that makes THE APARTMENT such a surprisingly compelling read and so apropos; it captures the mood of the current moment and what seems to be a new "lost generation," one formed not so much by exposure to violence, as immunity to and alienation from it. Once upon a time, there was no place like home; in Mr. Baxter's world, home, it seems, is no place."—Adam Langer, The New York Times
"Absorbing, atmospheric and enigmatic... With its disorienting juxtaposition of the absolutely ordinary and the strange and vaguely threatening, the novel evokes the work of Franz Kafka and Haruki Murakami, while its oblique explorations of memory suggest a debt to W.G. Sebald... Baxter's provocative, unsettling novel is, among other things, about the inexorability of identity and 'the immortality of violence.'"—Los Angeles Times
"In just over 200 pages, The Apartment impressively and tactfully covers everything from the effects of American interventionism on its relationship with Europe to questions of personal identity."—Esquire
"An elegant portrait of a man half-fractured, half-intact-a post-war somebody caught between repair and capitulation, controlling his own fate and imprisoned by regret."—The Texas Observer
"'I was born to hate the place I came from.' Greg Baxter's first novel THE APARTMENT is a short but powerful exploration of that sentiment, uttered halfway through the novel by its narrator, a 41-year-old American ex-Navy officer and Iraq War veteran."—Chicago Tribune
ACCLAIM FOR THE APARTMENT "Baxter has written a novel of subtle beauty and quiet grace; I found myself hanging on every simple word, as tense about the consequences of a man finding an apartment as if I were reading about a man defusing a bomb... It is one of the best novels I have read in a long time."—Stacey D'Erasmo, New York Times Sunday Book Review
"A true gem... Lucid, often hypnotic and, at times, even transporting. [Baxter] keeps his sentences short, his adjectives limited, his pacing leisurely. The paragraphs are long and there are no chapter breaks, yet his acute observation means this is no mere minimalist undertaking... The Iraq sections are astonishingly well done, and the man's history as a Naval officer feels almost exactly right to the former Naval officer who happens to be writing this review."—Los Angeles Review of Books
"A beautiful meditation on brutality and culture, which are sometimes one and the same."—Minneapolis Star Tribune
"In a year marked by epics, it's a relief to delve into this quiet, surprisingly tense debut novel - small enough to fit into a stocking but packing a huge emotional punch."—Entertainment Weekly
"In this bleak but affecting novel, an unnamed American expat spends a day walking through a frigid, unidentified European city in search of an apartment...The details of his day are rendered with anaesthetized precision and achieve a cumulative force of grief, equanimity, and resolve."—The New Yorker
"In the layered narratives of Baxter's piercing first novel, a young American returned from Iraq struggles to find a new life in Europe."—New York Times, Sunday Book Review, Editor's Choice