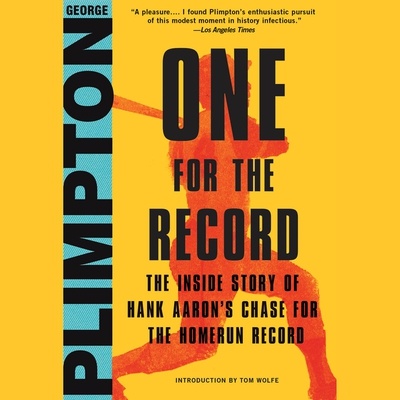 In ONE FOR THE RECORD, George Plimpton recounts Hank Aaron's thrilling race to become the new home run champion. Amidst media frenzy and death threats, Aaron sought to beat Babe Ruth's record. In 1974, he finally succeeded.

A fascinating examination of the psychology of baseball players, ONE FOR THE RECORD gives an absorbing account of the men on the mound who had to face Aaron. But the book's true genius lies in the portrait of Aaron himself, and his discussions on his philosophy on hitting and the game of baseball.

"Plimpton's account of the home run quest proves to be well worth the reading, even for people who thought Babe Ruth was a candy bar and Aaron a biblical prophet. Writing with his usual grace and attention to the small but significant detail, Plimpton makes it all seem much fresher than when it was happening." —Chicago Daily News Service
"A delight--more entertaining, if possible, than I remembered... the reader leaves George Plimpton's wide world of sports with deep reluctance.... His prose is as elegant and seemingly effortless as Ted Williams's swing or an Arnold Palmer iron shot.... His teammates recede--like the old baseball players vanishing into the cornfield in Field of Dreams, taking their magical world with them but living on in fond memory."—Edward Kosner, Wall Street Journal
"Plimpton's One For the Record is another in his series of thinking man's books about sports ... Plimpton's crisp chronological reportorial job is a pleasure.... I found Plimpton's enthusiastic pursuit of this modest moment in history infectious."—Los Angeles Times