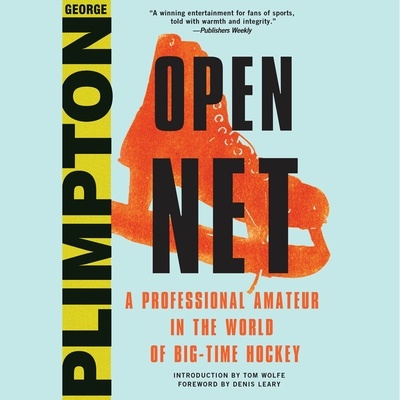 In OPEN NET, George Plimpton takes to the ice as goalie for his beloved Boston Bruins. After signing a release holding the Bruins blameless if he should meet with injury or death, he survives a harrowing, seemingly eternal five minutes in an exhibition game against the always-tough Philadelphia Flyers.

With reflections on such hockey greats as Wayne Gretzky, Bobby Orr, and Eddie Shore, OPEN NET is at once a celebration of the thrills and grace of the greatest sport on ice and a probing meditation into the hopes and fears of every man.

"A season with the Boston Bruins is the basis for Plimpton's absorbing personal report ... A winning entertainment for fans of sports, told with warmth and integrity."—Publishers Weekly
"A delight--more entertaining, if possible, than I remembered... the reader leaves George Plimpton's wide world of sports with deep reluctance.... His prose is as elegant and seemingly effortless as Ted Williams's swing or an Arnold Palmer iron shot.... His teammates recede--like the old baseball players vanishing into the cornfield in Field of Dreams, taking their magical world with them but living on in fond memory."—Edward Kosner, Wall Street Journal
"[Plimpton's] sojourn with the Bruins in training camp culminated in a five-minute stint in goal against the Philadelphia Flyers ... Plimpton tries valiantly to acquire the skills of the position and comes to his moment of truth."—Library Journal