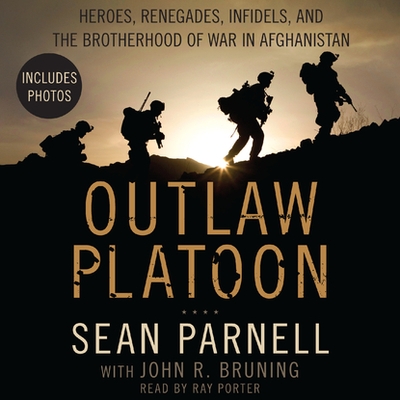 In combat, men measure up. Or don't. There are no second chances.

In this vivid account of the U.S. Army's legendary 10th Mountain Division's heroic stand in the mountains of Afghanistan, ...

In combat, men measure up. Or don't. There are no second chances.

In this vivid account of the U.S. Army's legendary 10th Mountain Division's heroic stand in the mountains of Afghanistan, Captain Sean Parnell shares an action-packed and highly emotional true story of triumph, tragedy, and the extraordinary bonds forged in battle.

At twenty-four years of age, U.S. Army Ranger Sean Parnell was named commander of a forty-man elite infantry platoon—a unit that came to be known as the Outlaws—and was tasked with rooting out Pakistan-based insurgents from a mountain valley along Afghanistan's eastern frontier. Parnell and his men assumed they would be facing a ragtag bunch of civilians, but in May 2006 what started out as a routine patrol through the lower mountains of the Hindu Kush became a brutal ambush. Barely surviving the attack, Parnell's men now realized that they faced the most professional and seasoned force of light infantry the U.S. Army had encountered since the end of World War II.

What followed was sixteen months of close combat, over the course of which the platoon became Parnell's family: from Staff Sergeant Greg Greeson, the wise, chain-smoking veteran who never lost his cool; to Specialist Robert Pinholt, a buttoned-down conservative with the heart of a warrior and the mind of an economist; to Staff Sergeant Phil Baldwin, the platoon's voice of calm and reason, a man who sacrificed everything following the events of 9/11—career, home, financial stability—to serve his country. But the cost of battle was high for these men: Over 80 percent were wounded in action, putting their casualty rate among the highest since Gettysburg, and not all of them made it home.

A searing and unforgettable story of friendship in battle, Outlaw Platoon brings to life the intensity and raw emotion of those sixteen months, showing how the fight reshaped the lives of Parnell and his men and how the love and faith they found in one another ultimately kept them alive.

This audiobook is enhanced with a downloadable PDF containing photographs from the hardcover edition.