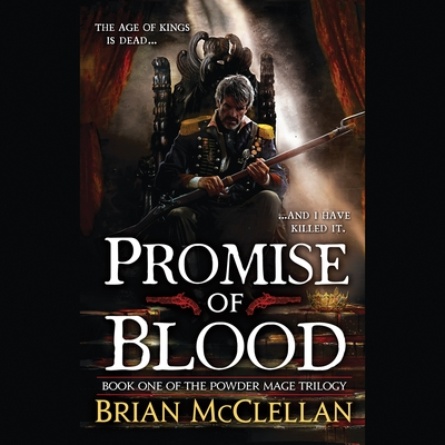 
It's a bloody business overthrowing a king...
Field Marshal Tamas' coup against his king sent corrupt aristocrats to the guillotine and brought bread to the starving. But it also provoked war with the Nine Nations, internal attacks by royalist fanatics, and the greedy to scramble for money and power by Tamas's supposed allies: the Church, workers unions, and mercenary forces.

It's up to a few...
Stretched to his limit, Tamas is relying heavily on his few remaining powder mages, including the embittered Taniel, a brilliant marksman who also happens to be his estranged son, and Adamat, a retired police inspector whose loyalty is being tested by blackmail.


But when gods are involved...
Now, as attacks batter them from within and without, the credulous are whispering about omens of death and destruction. Just old peasant legends about the gods waking to walk the earth. No modern educated man believes that sort of thing. But they should...

In a rich, distinctive world that mixes magic with technology, who could stand against mages that control gunpowder and bullets? PROMISE OF BLOOD is the start of a new epic fantasy series from Brian McClellan.
Winner of the David Gemmell Morningstar Award for Best Debut Fantasy.

"McClellan's debut packs some serious heat...A thoroughly satisfying yarn that should keep readers waiting impatiently for further installments."—Kirkus (Starred Review)
"I love the world Brian McClellan builds, Powder Mages with flintlock pistols against white-gloved Privileged for the fate of a nation and more. Promise of Blood feels like the start of something amazing."—Django Wexler
"The world of the privileged sorcerers and the strange abilities of the powder mages who can manipulate gunpowder are just as well drawn in this captivating universe."—RT Book Reviews (4 1/2 stars)
"Brian McClellan is an explosive powder keg of imagination with an expertly-plotted fuse. The stories he tells are the stories we'll be reading for years to come."—Sam Sykes on Promise of Blood
"Gunpowder and magic. An explosive combination. Promise of Blood is the best debut I've read in ages."—Peter V. Brett
"McClellan's debut is a lot of fun --- a historically influenced fantastical romp filled with machismo, intrigue and magic."—SciFi Now (UK)
"Promise of Blood is a hugely promising debut. Guns, swords, and magic together? What more could you want? How about tense action, memorable characters, rising stakes, and cool, cool magic? Not only the finest flintlock fantasy I've read, but also the most fun. Brian McClellan is the real thing."—New York Times bestseller Brent Weeks
"McClellan neatly mixes intrigue and action...in a society where new forces like labor unions, gunpowder-armed soldiers, and explosion-causing 'powder mages' clash with traditional magics, more, and beliefs."—Publishers Weekly
"This book is just plain awesome. I found myself enjoying every moment of it. Innovative magic, quick-paced plot, interesting world. I had a blast."—New York Times bestselling author, Brandon Sanderson