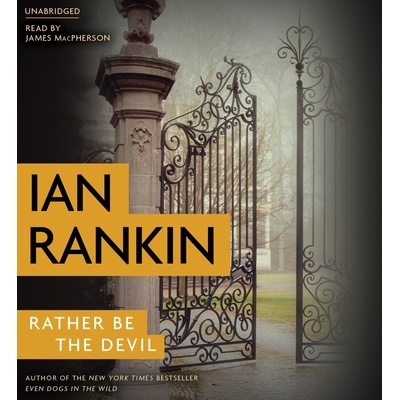 in stock
Rather Be the Devil
(Unabridged)
add to wishlist give as a gift Play Sample
Rebus investigates a cold case that just turned red hot. As he settles into an uneasy retirement, Rebus has given up his favorite vices. There's just one habit he can't ...
add to cart

As he settles into an uneasy retirement, Rebus has given up his favorite vices. There's just one habit he can't shake: he can't let go of an unsolved case. It's the only pastime he has left and up until now, it's the only one that wasn't threatening to kill him. But when Rebus starts reexamining the facts behind the long-ago murder of a glamorous woman at a luxurious hotel - on the same night a famous rock star and his entourage where also staying there - the past comes roaring back to life with a vengeance.

And as soon as Rebus starts asking questions about the long forgotten crime, a fresh body materializes. His inquiries reunite him with his old pals-Siobhan Clarke and Malcolm Fox-as they attempt to uncover the financial chicanery behind the savage beating of an upstart gangster, a crime that suggests the notorious old school crime boss Big Ger Cafferty has taken to retirement as poorly as Rebus himself.

As he connects the mysteries of the past to the those of the present, Rebus learns - the hard way - that he's not the only one with an insatiable curiosity about what happened in that hotel room forty years ago, and that someone will stop at nothing to ensure that the crime remains ancient history.

A twisted tale of power, corruption, and bitter rivalries in the dark heart of Edinburgh, Rather Be the Devil showcases Rankin and Rebus at their unstoppable best.

"It is sensational...this story truly sings."—Vick Mickunas, Dayton Daily News
"Rankin's procedurals are strong, well-constructed, page-turning mysteries, and his latest is no exception."
—San Francisco Chronicle
Praise for RATHER BE THE DEVIL:

"As always, Rankin delivers some fascinating procedural details, but the heart of the book--and its main appeal to crime-fiction readers--lies in the evolving personal relationships between the three cops and one bad guy. The switching of roles between Rebus and Clark continues to intrigue, but even better is the transformation of Fox from a behind-the-scenes guy...into a real cop working the mean streets."—Booklist
Praise for EVEN DOGS IN THE WILD:
"[A] finely crafted new entry...[Rankin] is as tireless in delivering the goods as his creation is in solving tough cases."
—Kirkus
"This may be the author's 21st series outing, but the thrill is still fresh."
—Library Journal

"It's always intriguing to follow Rebus around the city and country he loves, and for those who have followed his long career the pleasures are even richer."—Michele Ross, The Cleveland Plain Dealer
"With its trademark blend of sharp wit and even sharper police work, this entry is yet another example of why Rankin remains in the top echelon of Scottish crime writers."
—Publishers Weekly
A "twisty, darkly topical, and immaculately executed tale of Edinburgh's underbelly."—The Guardian
"Rankin is a past master of atmospheric, dark crime fiction, and in Even Dogs in the Wild, his 31st book, he's in top form."—Collette Bancroft, Tampa Bay Times
"One of the best things in crime fiction for years, but Rankin kicks it up several notches here."