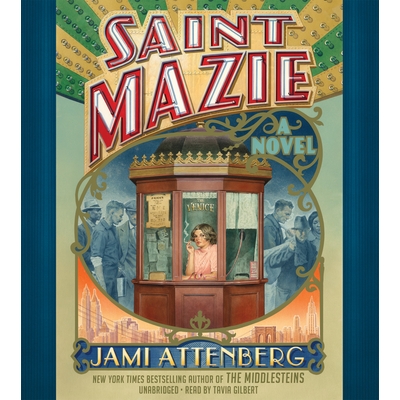 When the Great Depression hits, Mazie's life is on the brink of transformation. Addicts and bums roam the Bowery; homelessness is rampant. If Mazie won't help them, then who? When she opens the doors of The Venice to those in need, this ticket taking, fun-time girl becomes the beating heart of the Lower East Side, and in defining one neighborhood helps define the city.

Then, more than ninety years after Mazie began her diary, it's discovered by a documentarian in search of a good story. Who was Mazie Phillips, really? A chorus of voices from the past and present fill in some of the mysterious blanks of her adventurous life.

Inspired by the life of a woman who was profiled in Joseph Mitchell's classic Up in the Old Hotel, SAINT MAZIE is infused with Jami Attenberg's signature wit, bravery, and heart. Mazie's rise to "sainthood"--and her irrepressible spirit--is unforgettable.

"Attenberg is a nimble and inventive storyteller with a particular knack for getting at the heart of outsized characters. . . . [she] proves her chops as a historical novelist by perfectly capturing Mazie's jazz-age voice, which ranges from clipped and vulgar to melancholy and lyrical. Attenberg also sidesteps many of the pitfalls of the form: no day-by-day plodding through the decades, no unedited research notes masquerading as dialogue. She resists any plot twist or final revelation to provide a tidy psychological explanation for Mazie Phillips-Gordon sainthood."—Washington Post
"A terrific novel--touching, funny, big-hearted, just like Mazie herself. It's written with great verve and brio, and I loved the way we circle around and then dig deeper into Mazie's life through the multiple voices and sources. It's Mazie herself, though, who shines the brightest, and who lingers on in the mind and heart, a real diamond in the rough." —Monica Ali, author of Brick Lane and Untold Story