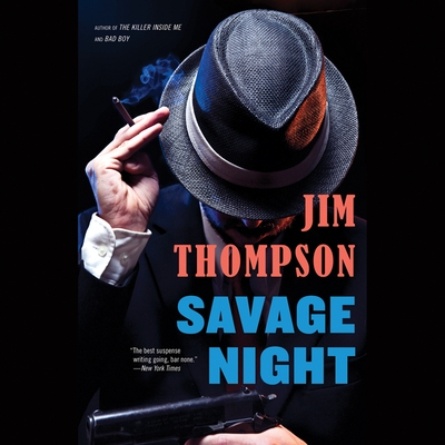 Jake's to be the top witness in a major case against organized crime--if he hasn't already kicked the bucket before the trial has its day in court. But an enigmatic mafioso known only as The Man has a plan to make dead certain Jake never gets the chance to testify.

The Man's hired Charlie "Little" Bigger, a hit man barely five feet tall, to infiltrate the Winroy residence as a tenant and murder Winroy in cold blood. To Little, it seems like the easiest job on Earth. Until he lays eyes on the beautiful and dangerous Fay and the Winroy's young housemaid Ruth, a woman as sensual as she is vulnerable. SAVAGE NIGHT is Jim Thompson at his most unpredictable and deeply suspenseful, in a claustrophobic thriller of one man's fractured mind.

"The master of the American groin-kick novel."—Vanity Fair
"My favorite crime novelist-often imitated but never duplicated."—Stephen King
"The most hard-boiled of all the American writers of crime fiction."—Chicago Tribune
"If Raymond Chandler, Dashiell Hammett and Cornell Woolrich would have joined together in some ungodly union and produced a literary offspring, Jim Thompson would be it...His work...casts a dazzling light on the human condition."—Washington Post
"The best suspense writer going, bar none."—The New York Times
"Like Clint Eastwood's pictures it's the stuff for rednecks, truckers, failures, psychopaths and professors ... one of the finest American writers and the most frightening, [Thompson] is on best terms with the devil. Read Jim Thompson and take a tour of hell."—The New Republic