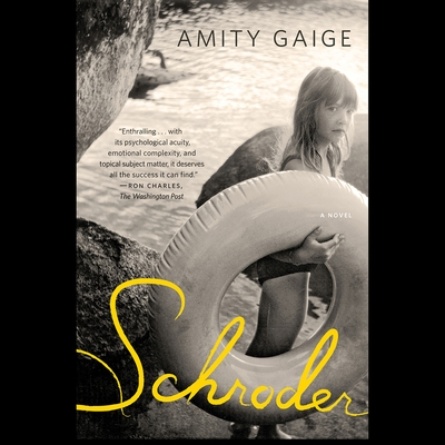 SCHRODER relates the story of Eric's urgent escape years later to Lake Champlain, Vermont, with his six-year-old daughter, Meadow, in an attempt to outrun the authorities amid a heated custody battle with his wife, who will soon discover that her husband is not who he says he is. From a correctional facility, Eric surveys the course of his life to understand-and maybe even explain-his behavior: the painful separation from his mother in childhood; a harrowing escape to America with his taciturn father; a romance that withered under a shadow of lies; and his proudest moments and greatest regrets as a flawed but loving father.

Alternately lovesick and ecstatic, Amity Gaige's deftly imagined novel offers a profound meditation on history and fatherhood, and the many identities we take on in our lives--those we are born with and those we construct for ourselves.

"The measure of Gaige's great gifts as a storyteller is that she persuades you to believe in a situation that shouldn't be believable, and to love a narrator who shouldn't be lovable. Seldom has such a daring concept for a novel been grounded in such an appealing character."—Jonathan Franzen, author of Freedom and The Corrections
"The Folded World will appeal to readers who like to dive into the muck of internal and interpersonal conflicts, and break the surface with breath born of insight and empathy. Amity Gaige's second novel lives up to the reputation she earned with her first one, as an original, compelling voice."—Chicago Tribune (Favorite Books of 2007)
"The bitterness and disillusion of marriage have been thoroughly plumbed in contemporary fiction; Gaige is one of the rare novelists who is more interested in its potential for happiness and grace. A-."—Entertainment Weekly on The Folded World
"Utterly devourable...gently, and beautifully unfolds, like a gauzy curtain in an open window."—Los Angeles Times on O My Darling
"Sparkles and delights...crystalline insights into the nature of love and flashes of narrative brilliance."—Publisher's Weekly on O My Darling
Praise for Amity Gagie
"In this tightly-written and emotionally satisfying novel, a young couple's marriage is thrown into jeopardy by the husband's workaholic tendencies... [Gaige] is extraordinarily adept at revealing her characters' personalities in just a few words... Stirring."—New York Times Book Review on The Folded World
"Complicated and nuanced . . . the novel is absorbing, with a propulsive plot and a narrator who is charming, ambivalent, and searching-a man driven by love who understands that love cannot save him."—The New Yorker
"You will not want to put this book down. You will want to read it in one big gulp. This is a bullet of a novel, aimed at our pieties about parenthood and familial love. You won't soon forget Schroder or his daughter or the sentences that bring them to life. To those who know Gaige's first two novels, it's no surprise she's produced another stunner. To those who don't, you're in for a treat."—Adam Haslett, author of Union Atlantic, and the New York Times best-selling short story collection You Are Not a Stranger Here
"Love, marriage, and the whole damn thing-all spanned in a witty, tender first novel. With a flavor of Lorrie Moore, graceful, bright, modern writing."—Kirkus on O My Darling