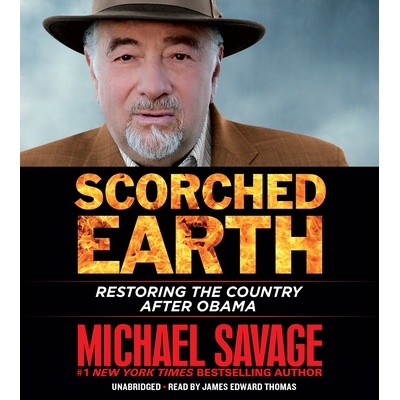 in stock
Scorched Earth
(Unabridged)
add to wishlist give as a gift Play Sample
Michael Savage predicted the chaos that is Obama's legacy. Now he tells us whether the destruction can be stopped! The prophetic author of the bestselling Government Zero, Dr. Michael Savage ...
add to cart


Michael Savage predicted the chaos that is Obama's legacy. Now he tells us whether the destruction can be stopped!

The prophetic author of the bestselling Government Zero, Dr. Michael Savage is back with his most urgent and powerful work.

Listeners to Dr. Savage's top-rated radio talk show, The Savage Nation, know him to be an articulate and engaged spokesman for traditional American values of borders, language, and culture.

Now, after eight divisive years of Barack Obama, Dr. Savage lays out an irrefutable case for how our nation has been undermined by terrorists from without, by anarchists from within, by a president and politicians with contempt for the Constitution and the law, and by a complicit liberal media.

With words and topics that are as insightful as they are timely, he makes an ironclad case for the dangers we face from Hillary Clinton and her fellow travelers in the progressive movement. He also explains why Donald Trump may be one of the two best hopes for America's future as we try to regain control of our government, our country, and our national soul.

The other hope? As Dr. Savage explains in some of his most heartfelt and passionate words, it is we, the people: the ordinary "Eddies," as he calls them-motivated, roused, and engaged.

This book is about much more than an election. It is a veteran commentator and celebrated raconteur providing a blueprint for how to regain our cherished freedoms and our national identity . . . before they are lost forever.

There is, Mr. Savage says, zero leadership, zero strategy against the Islamic State, zero military, zero education, zero culture - and right on down the line. The author is convinced Western civilization is at serious risk, and offers, among many other things, "40 actions to save America" against what he calls a "terrifying agenda." Mr. Savage also defines what it means to be an American in this day and age.—The Washington Times on Government Zero
To say this is a 'must-read' book is putting it mildly. If you care at all about your present life and liberty, and those of the future for your offspring, then "Government Zero" by Michael Savage is for you.—RightPundits on Government Zero