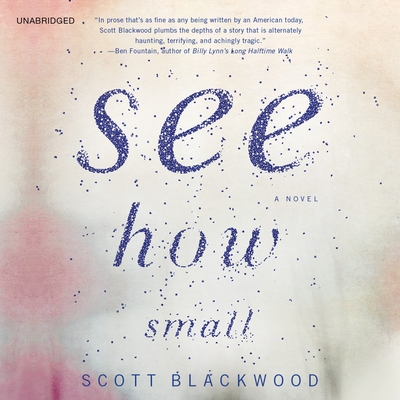 A riveting novel about the aftermath of a brutal murder of three teenage girls, written in incantatory prose "that's as fine as any being written by an American author today." (Ben Fountain)

One late autumn evening in a Texas town, two strangers walk into an ice cream shop shortly before closing time. They bind up the three teenage girls who are working the counter, set fire to the shop, and disappear. SEE HOW SMALL tells the stories of the survivors--family, witnesses, and suspects--who must endure in the wake of atrocity. Justice remains elusive in their world, human connection tenuous.

Hovering above the aftermath of their deaths are the three girls. They watch over the town and make occasional visitations, trying to connect with and prod to life those they left behind. "See how small a thing it is that keeps us apart," they say. A master of compression and lyrical precision, Scott Blackwood has surpassed himself with this haunting, beautiful, and enormously powerful new novel.

"Blackwood's stories of loss and compensation are filled with surprise punches that leave the reader reeling in delight. This is a fine and exciting debut."—Rick DeMarinis
"We Agreed to Meet Just Here manages somehow to be both spare and all-encompassing, a mystery that delves into the very nature of disappearance."—Dallas Morning News
"Scott Blackwood is a wizard, and in See How Small he puts his skills to dazzling use as he anatomizes a town and a crime. Best of all is the deep empathy he brings to his characters, innocent and guilty, wise and confused; all of them are given the grace of his understanding. A vivid and astonishing novel."—Margot Livesey, author of The Flight of Gemma Hardy
Praise for Scott Blackwood

"This little gem of a book puts on lush display Scott Blackwood's talent for measuring and connecting the previously un-connectable in lived experience, and making of it an entirely new whole which we immediately accept as true, natural, exhilarating, even inevitable. He is a lovely sentence writer, and this first novel sparkles with invention."—Richard Ford (on We Agreed to Meet Just Here)
Praise for See How Small
"Powerful. Ambitious. Blackwood is especially good at making things fit in stories that don't seem to fit at first. Beautiful music, line by line."—Andre Dubus (on In the Shadow of Our House)
"Acute and nimble stories...so honest as they capture the dapple of emotions and perceptions that cross the mind like sunlight and shadow on a river...an impressive, accomplished debut."—Julie Grey, New York Times Book Review
"Horrible deaths of the innocent, and the various means and tactics by which the living manage to go on in the aftermath of unsolved horror, form the heart of Scott Blackwood's haunted and haunting novel, See How Small. His prose is crisp and his narrative approach is fresh and inventive, calmly pushing forward, with characters rendered so convincingly you think about sending cards of condolence or calling with advice on the investigation."—Daniel Woodrell, author of Winter's Bone and The Maid's Version
"See How Small is superb. In prose that's as fine as any being written today, Scott Blackwood plumbs the depths of a story that is alternately haunting, terrifying, and achingly tragic. Blackwood illuminates the human condition even as he breaks our hearts."—Ben Fountain, author of Billy Lynn's Long Halftime Walk