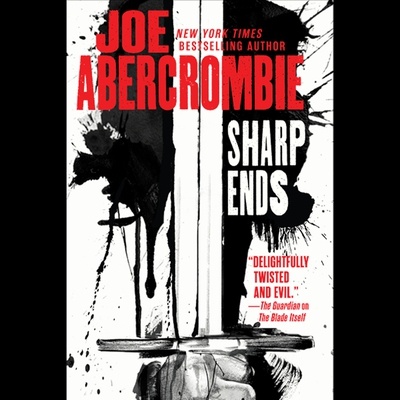 Curnden Craw and his dozen are out to recover a mysterious item from beyond the Crinna. Only one small problem: no one seems to know what the item is.

Shevedieh, the self-styled best thief in Styria, lurches from disaster to catastrophe alongside her best friend and greatest enemy, Javre, Lioness of Hoskopp.

And after years of bloodshed, the idealistic chieftain Bethod is desperate to bring peace to the North. There's only one obstacle left - his own lunatic champion, the most feared man in the North: the Bloody-Nine . . .

"Imagine The Lord of the Rings as directed by Kurosawa."—Lev Grossman, Wall Street Journal on The Heroes
"Terrific fight scenes, compelling characters (some familiar, some new), and sardonic, vivid prose show Abercrombie at the top of his game."—Publishers Weekly (Starred Review) on Red Country
"Exhilarating... Abercrombie's knack for wit and grit holds your attention throughout, and his eye for character means that there's heart as well as muscle."—SFX (UK)
"Abercrombie writes fantasy like no one else."—Guardian
"Pointed, driven, and sharp."—Locus on Red Country
"[Abercrombie has] begun breaking his own rules. And succeeding wildly at it. ... [R]arely has Abercrombie had so much fun while rollicking through his colorful cast's foibles and witty dialogue - and rarely has he dished out so much straight-for-the-heart poignancy."—The A.V. Club
"Magnificent, richly entertaining"—Time on The Heroes
"New, fresh, and exciting."—The Independent (UK)