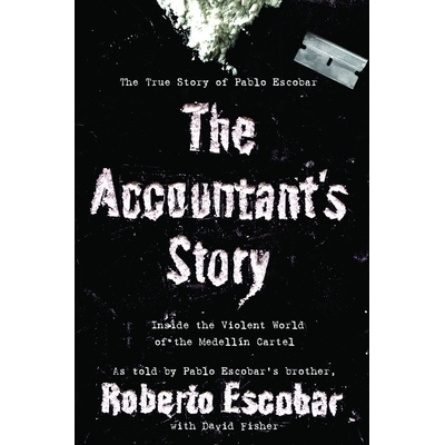 How much money? According to Roberto, he and his brother's operation spent $1000 a week just purchasing rubber bands to wrap the stacks of cash -- and since they had more illegal money than they could deposit in the banks, they stored the bricks of cash in their warehouses, annually writing off 10% as "spoilage" when the rats crept in at night and nibbled on the hundred dollar bills.

At the height of this cartel's reach, in order to help them deliver their goods, the Escobars purchased thirteen 727 airliners from Eastern Airlines when that airline went bankrupt. They also purchased six Russian mini-submarines. Roberto knows - he did the books.

In short, this is Pablo Escobar's story in the words of one of his closest confidants, his brother Roberto. It's all here -- the brutal violence inside the world of the drug cartel, dealing with American drug forces and the CIA, the problems the Escobars faced when going up against the Colombian mafia, even Pablo's moments of kindness and compassion towards less fortunate countrymen in Colombia. others. As Roberto points out, although many people view Escobar as a monster, thousands still visit his grave every year to mourn him, and revere him as a savior.

Now in his 60s, Roberto, who has served 10 years in Colombian jail for his part in the Medellin cartel, now wants to set the record straight, once and for all.

"Narrator Ruben Diaz's bilingual skills allow him fluency with the mixture of English and many Spanish names, phrases, and locations. His English has a hint of a Latin accent, adding a linguistic authenticity to the story of a simple Colombian man who loved his family, killed his enemies, and lived in the shadows."—AudioFile