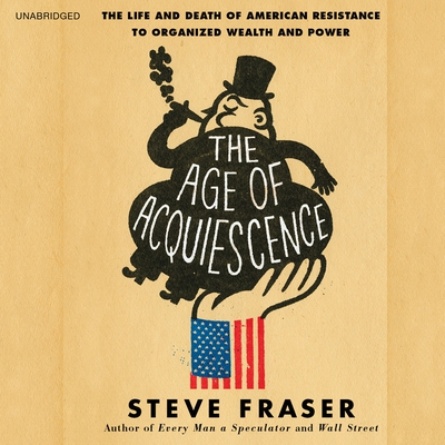 From the American Revolution through the Civil Rights movement, Americans have long mobilized against political, social, and economic privilege. Hierarchies based on inheritance, wealth, and political preferment were treated as obnoxious and a threat to democracy. Mass movements envisioned a new world supplanting dog-eat-dog capitalism. But over the last half-century that political will and cultural imagination have vanished. Why?

THE AGE OF ACQUIESCENCE seeks to solve that mystery. Steve Fraser's account of national transformation brilliantly examines the rise of American capitalism, the visionary attempts to protect the democratic commonwealth, and the great surrender to today's delusional fables of freedom and the politics of fear. Effervescent and razorsharp, THE AGE OF ACQUIESCENCE will be one of the most provocative and talked-about books of the year.

"Sweeping and ambitious....Fraser weaves together a rich tapestry of history, statistics and barely suppressed outrage."—Maura Casey, Washington Post
"Steve Fraser has given us a sweeping account of the economic and cultural changes in American society that combined to create an earlier era of working class struggle and hope, and then in our present moment have generated quiescence and despair. Read this book for its synoptic account of the ways that cultural manipulation have accompanied intensifying economic exploitation. But read it also to snatch glimmers of a better future from the past."—Frances Fox Piven, author of Challenging Authority: How Ordinary People Change America
"Steve Fraser is that rare writer who combines a deep knowledge of history with a penetrating analysis of our current political and social condition. Here, in the lively prose that marks all his writing, he probes the similarities and differences between America's two gilded ages - the late nineteenth-century and today - offering provocative observations about why the first produced massive popular resistance and the second resigned acquiescence."—Eric Foner, the Pulitzer Prize winning author of The Fiery Trial: Abraham Lincoln and American Slavery
"Fascinating....As Fraser forcefully shows, during the first Gilded Age American elites were threatened with more than embarrassing statistics."—Naomi Klein, New York Times Book Review
"Fraser is particularly passionate and penetrating in his analysis of our present state of submission and surrender. His intention is not just to chronicle the change but to explain why it happened."—Jon Wiener, Los Angeles Times
"Over the last few years, there's been a wealth of books describing our new Gilded Age and bemoaning the extreme economic inequality that now defines modern America. Steve Fraser's fascinating The Age of Acquiescence is indispensable because it explains how that happened, how America's long standing opposition to concentrated wealth was defeated. Steve Fraser, in other words, is Thomas Piketty with politics, providing a crucial guide in helping the ninety-nine percent understand the terms of their defeat and, more importantly, how it can once again go on the offensive."—Greg Grandin, author of The Empire of Necessity: Slavery, Freedom, and Deception in the New World and Fordlandia: The Rise and Fall of Henry Ford's Forgotten Jungle City
"Delivered with real verve....Like Marx in the Communist Manifesto and Thomas Piketty's Capital, but from an American perspective, Fraser writes majestically if not almost poetically about the making of capitalism."—Harvey J. Kaye, Daily Beast
"Provocative....A perceptive reading of the current zeitgeist."—Michael Kazin, Slate
"Fraser offers a sweeping, forcefully argued comparison between, on the one hand, the economy, ideology, and politics of the first Gilded Age and, on the other, the contemporary political scene."—Kim Phillips-Fein, Atlantic
"Fraser's work shines as an angry but cogent denouncement of America's growing wealth disparity. Highly recommended."— Library Journal
"A splendid and illuminating book. Fraser's writing is clear-headed and free of cant. I know of no better an accounting for the division of America over the last forty years into a minority of the terrified rich and a majority of the humiliated poor."—Lewis Lapham, editor of Lapham's Quarterly and author of Pretensions to Empire: Notes on the Criminal Folly of the Bush Administration
"An absorbing, vigorous account of class politics....an excellent, very readable recreation of an authentically American form of working-class militancy and its eclipse."—Publishers Weekly
"A sharp-edged, completely fascinating look at American history and the contemporary politics of the haves and have-nots."—Vanessa Bush, Booklist
"No one writing history today does it with the power, passion, insight, and rigor of Steve Fraser. In The Age of Acquiescence, Fraser reaches back a century to the first Gilded Age and then pushes forward into our own Gilded Age, providing his readers with a history that matters, that informs, and that, most critically, raises essential questions we should all be asking about wealth, power, and inequalities in America today."—David Nasaw, author of The Patriarch: The Remarkable Life and Turbulent Times of Joseph P. Kennedy