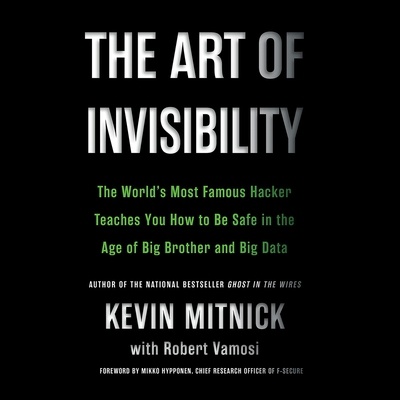 Like it or not, your every move is being watched and analyzed. Consumer's identities are being stolen, and a person's every step is being tracked and stored. What once might have been dismissed as paranoia is now a hard truth, and privacy is a luxury few can afford or understand.

In this explosive yet practical book, Kevin Mitnick illustrates what is happening without your knowledge--and he teaches you "the art of invisibility." Mitnick is the world's most famous--and formerly the Most Wanted--computer hacker. He has hacked into some of the country's most powerful and seemingly impenetrable agencies and companies, and at one point he was on a three-year run from the FBI. Now, though, Mitnick is reformed and is widely regarded as the expert on the subject of computer security. He knows exactly how vulnerabilities can be exploited and just what to do to prevent that from happening.

In THE ART OF INVISIBILITY Mitnick provides both online and real life tactics and inexpensive methods to protect you and your family, in easy step-by-step instructions. He even talks about more advanced "elite" techniques, which, if used properly, can maximize your privacy. Invisibility isn't just for superheroes--privacy is a power you deserve and need in this modern age.

Praise for Ghost in the Wires

"Intriguing, insightful and extremely educational into the mind of one who truly mastered the art of social engineering with the use of a computer and modern day technologies. I strongly believe that one can learn a great deal about protecting themselves once they understand how another one perpetrates the crime."—Frank W. Abagnale, author of Catch Me if You Can
Praise for The Art of Deception

"The most famous computer hacker in the world. A tour de force."—Publishers Weekly
"How would it feel to find out that your neighbor and friend has secretly observed you in your own home for years? The place that should be most private to you was not, and the intruder's devices themselves weren't something you'd ever have thought to look for. This kind of behavior is the opposite of giving normal people freedom and security, of valuing and respecting them as humans--and it's happening more and more. The answer to peeping eyes and cyber theft is to move society toward greater cyber-security and it all starts with essential education about being private and invisible in our daily lives. Kevin's book is the must read in this new world."—Steve Wozniak, cofounder, Apple Inc.
"The FBI's most-wanted hacker."—Wired
"The world's most famous computer hacker and cybercult hero...has written a blueprint for system security based on his own experiences. Required reading for IT professionals, this book is highly recommended for public, academic, and corporate libraries."—Library Journal