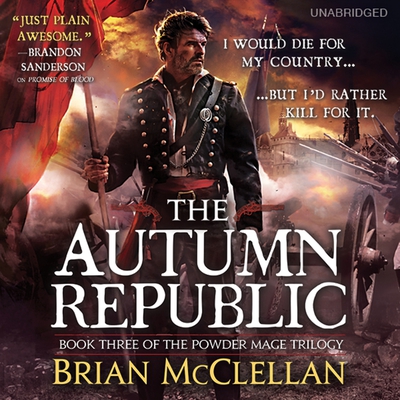 An army divided...
With the Kez still bearing down upon them and without clear leadership, the Adran army has turned against itself. Inspector Adamat is drawn into the very heart of this new mutiny with promises of finding his kidnapped son.

All hope rests with one...
And Taniel Two-shot, hunted by men he once thought his friends, must safeguard the only chance Adro has of getting through this war without being destroyed...
THE AUTUMN REPUBLIC is the epic conclusion that began with Promise of Blood and The Crimson Campaign.

"The world of the privileged sorcerers and the strange abilities of the powder mages who can manipulate gunpowder are just as well drawn in this captivating universe."—RT Book Reviews (4 1/2 stars) on Promise of Blood
"Promise of Blood is a hugely promising debut. Guns, swords, and magic together? What more could you want? How about tense action, memorable characters, rising stakes, and cool, cool magic? Not only the finest flintlock fantasy I've read, but also the most fun. Brian McClellan is the real thing."—New York Times bestseller Brent Weeks on Promise of Blood
"McClellan's debut packs some serious heat.... A thoroughly satisfying yarn that should keep readers waiting impatiently for further installments."—Kirkus (Starred Review) on Promise of Blood
"Gunpowder and magic. An explosive combination. Promise of Blood is the best debut I've read in ages."—Peter V. Brett
"I love the world Brian McClellan builds, Powder Mages with flintlock pistols against white-gloved Privileged for the fate of a nation and more. Promise of Blood feels like the start of something amazing."—Django Wexler
"This book is just plain awesome. I found myself enjoying every moment of it. Innovative magic, quick-paced plot, interesting world. I had a blast."—Brandon Sanderson, New York Times bestselling author on Promise of Blood