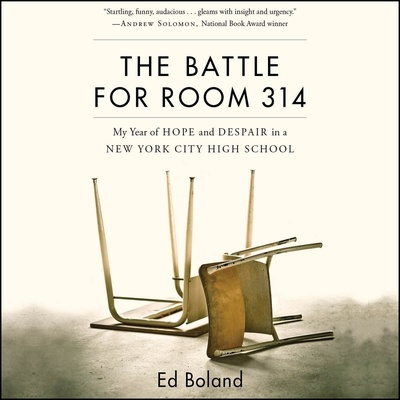 "The Battle for Room 314 is a personal account of Ed Boland's jarring foray into the high school classroom from the world of fundraising. With humor, insight, and grim persistence, Bolan grapples with the realities of his students lives as they all face the enduring issue of poverty. This memoir is a humbling reminder that no teacher is an island, and that schools, systems, and communities all share a responsibility to ensure that every child has access to a quality education. "—James E. Ryan, Dean of the Faculty and Charles William Eliot Professor, Harvard Graduate School of Education
"By turns harrowing and hilarious, Ed Boland's memoir about teaching in a New York City high school is raw, moving, and smashes the dangerous myth of the hero-teacher. The story told in The Battle for Room 314 shows us how high the stakes are for our most vulnerable students, and offers a fresh view and a pointed and powerful first-person perspective on American public education."—Piper Kerman, author of Orange is the New Black: My Year in a Women's Prison
"The Battle for Room 314 chronicles a year of gladiatorial altruism in the unruly arena of American public education. Ed Boland shares the startling, funny, audacious, and sad confrontations and conundrums he must puzzle his way through after deciding to try his hand at one of the most important, least appreciated professions in this country: teaching. His vivid anecdotes ensure there will be no reader left behind. Like his students, he sometimes fails a test, but he never loses hope, and his story gleams with insight and urgency."—Andrew Solomon, National Book Award winner and author of Far from the Tree: Parents, Children and the Search for Identity