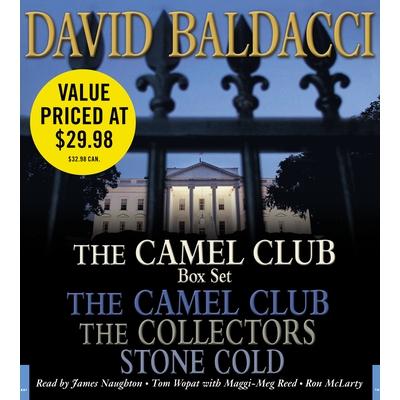 in stock
The Camel Club Audio Box Set
(Abridged)
add to wishlist give as a gift Play Sample
The Camel Club exists at the fringes of Washington, D.C., has no power, and consists solely of four eccentric members whom society has forgotten. One man leads this ragtag crew. ...
add to cart

The Camel Club exists at the fringes of Washington, D.C., has no power, and consists solely of four eccentric members whom society has forgotten. One man leads this ragtag crew. He has no known past and has taken the name "Oliver Stone." Day and night, Stone and his friends study wild conspiracy theories and the machinations of government, hoping to discover some truth that will hold America's leaders accountable to its citizens. Yet never in Stone's wildest nightmares could he imagine the conspiracy they are about to uncover, in...


THE CAMEL CLUB: After witnessing a shocking murder, the Club is slammed headfirst into a plot that threatens the very security of the nation, full of stunning twists, high-stakes intrigue, and global gamesmanship rocketing to the Oval Office and beyond. It's an event that may well be the catalyst for a long-threatened Armageddon, and all that stands in the way of this apocalypse are these unexpected heroes.


THE COLLECTORS: Headquartered in a caretaker's cottage in Mt. Zion Cemetery, Oliver Stone discovers that someone is selling America to its enemies-one classified secret at a time. When Annabelle Conroy, the greatest con artist of her generation, struts onto the scene in high-heeled boots, the Camel Club gets a sexy new edge as the investigation of two chilling murders hurtles them into a world of espionage that threatens to bring America to its knees.


STONE COLD: One by one, men from Stone's shadowy past are turning up dead. To almost all who know him, Harry Finn is a doting father and loving husband who uses his skills behind the scenes to keep our nation safe. But the other face of Harry Finn is that of an unstoppable killer with his sights on Stone. As the Camel Club and Annabelle fight for their lives, the twists and turns whipsaw, leading to a finale that is as explosive as it is shattering.