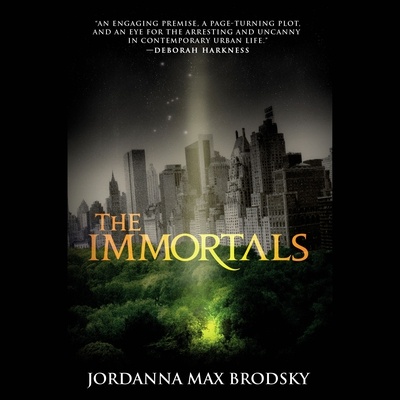 The city sleeps. Selene DiSilva walks her dog along the banks of the Hudson. She is alone -- just the way she likes it. She doesn't believe in friends, and she doesn't speak to her family. Most of them are simply too dangerous.

In the predawn calm, Selene finds the body of a young woman washed ashore, gruesomely mutilated and wreathed in laurel. Her ancient rage returns. And so does the memory of a promise she made long ago -- when her name was Artemis.

"The Immortals is a lively re-imagining of classical mythology with an engaging premise, a page-turning plot, and an eye for the arresting and uncanny in contemporary urban life."
--Deborah Harkness, New York Times bestselling author of A Discovery of Witches

The Immortals is the first book in the exciting new Olympus Bound trilogy. Look out for the sequel, Winter of the Gods, out in February 2017!

"Brilliantly conceived and tautly plotted, The Immortals is a pulse thrumming, fascinating novel. Selene is a perfect heroine for our times."—Eliot Schrefer
"This series launch is a wonderful choice for fans of Greek myths and urban fantasy readers looking for something different."—Library Journal (starred review)
"If you want a modern day murder mystery, steeped in myth with a dash of magic, this is a must read . . . Ms. Brodsky is definitely an author to watch."—Fantasy Faction on The Immortals
"Painstakingly researched, intellectually complex, and deeply rooted in the history and mythology of Ancient Greece, THE IMMORTALS is a richly imaginative, multi-layered tale that stimulates the heart and the mind in equal measure."—Ian Caldwell, New York Times bestselling author
"[D]one with great panache and intelligence: Brodsky knows her myth, and revels in depicting the erstwhile gods struggling with their fading powers and assuming, with varying degrees of success, the mantle of humanity."—Guardian on The Immortals
"Bravo to Brodsky for developing such a complex tale ... One to watch!"—RT Book Reviews on The Immortals
"Brodsky's writing has claws...They sink in with the first word and don't let go until you are finished with the book."—Darynda Jones, New York Times bestselling author
"The Immortals is a lively re-imagining of classical mythology with an engaging premise, a page-turning plot, and an eye for the arresting and uncanny in contemporary urban life."—Deborah Harkness, New York Times bestselling author of A Discovery of Witches
"Thrumming with life."—B&N.com
"Plays with more modern mythology, employing New York's own secret places and storied history to great effect. This intelligent, provocative fantasy breathes exciting new life into old, familiar tales."—Publishers Weekly (starred review)
"A fun ... treatment of myth and mystery."—Kirkus on The Immortals
"Irresistible...a page-turner that deftly weaves action, romance, and a dash of intellectual heft into one seamless whole."—Dustin Thomason, New York Times bestselling author
"Imaginative and fast-paced, The Immortals is pulse-pounding entertainment."—Kevin O'Brian, New York Times bestselling author of No One Needs to Know
"Brodsky's thriller feeds on the long-held love of Greek mythology in a reimagined, present-day world where gods and goddesses still walk among us."—Booklist