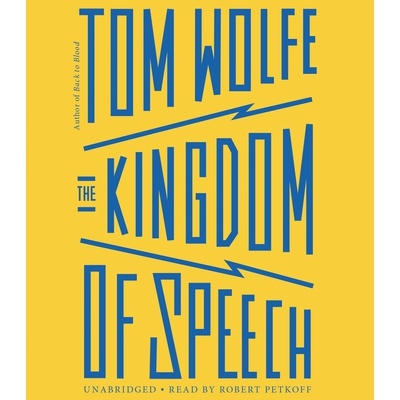 Tom Wolfe, whose legend began in journalism, takes us on an eye-opening journey that is sure to arouse widespread debate. THE KINGDOM OF SPEECH is a captivating, paradigm-shifting argument that speech--not evolution--is responsible for humanity's complex societies and achievements.

From Alfred Russel Wallace, the Englishman who beat Darwin to the theory of natural selection but later renounced it, and through the controversial work of modern-day anthropologist Daniel Everett, who defies the current wisdom that language is hard-wired in humans, Wolfe examines the solemn, long-faced, laugh-out-loud zig-zags of Darwinism, old and Neo, and finds it irrelevant here in the Kingdom of Speech.

"Wolfe, still a master at using language, is another claimant for the throne. The Kingdom of Speech is best read, then, with Wolfe not just as a narrator-historian but as a character. One who, after critiquing theorists who rule from insulated rooms, depicts himself in that exact setting for his book's final vision."
—Nate Hopper, Time
"In this mettlesome, slyly funny takedown, Wolfe spotlights two key scientific rivalries, each pitting a scrappy outsider against the academy....Wolfe's pithy and stirring play-by-play coverage of compelling lives and demanding science transforms our perception of speech....As always, white-suited Wolfe will be all over the media...stirring things up and sending readers to the shelves."—Donna Seaman, Booklist
"With his usual sharp wit and style, Wolfe's return to his roots is a thrilling journey into the who, what, where, when, why, and how of speech that will undoubtedly provoke stimulating conversations."
—Library Journal

"This being Tom Wolfe, the ponderous debate over language and evolution takes on a kind of pop-art pizzazz....A curiously entertaining little book."
—James Sullivan, Boston Globe

"A fresh look at an old controversy, as a master provocateur suggests that human language renders the theory of evolution more like a fable than scientific fact....Wolfe throws a Molotov cocktail at conventional wisdom in a book that won't settle any argument but is sure to start some."—Kirkus Reviews
"In lively, irreverent, and witty prose, Wolfe argues that speech, not evolution, sets humans apart from animals and is responsible for all of humankind's complex achievements....Wolfe's vibrant study manages to be clever, funny, serious, satirical, and instructive."—Publishers Weekly
"Tom Wolfe aims his unparalleled wit at evolution, arguing that complex language is the singular superpower that allows humans to rule the planet."
—Harper's Bazaar