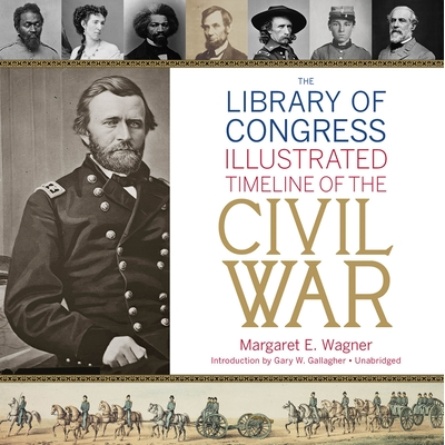 "In addition to the timeline - a wonderful tool if you want to look up a particular date (or thereabouts) 150 years ago - Wagner has written an authoritative account of the war. And her book features more than 350 photos, maps, manuscripts, lithographs and original drawings, many rare and never before published." —--Richmond Times-Dispatch
"A rich feast of words and pictures that only the Library of Congress-with its vast resources and incomparable expertise-could produce. There have been Civil War almanacs and chronologies before-but none so sumptuous and irresistible-none, like this one, a genuine page turner."—Harold Holzer, editor of The New York Times The Complete Civil War 1861-1865 and chairman of the Abraham Lincoln Bicentennial Foundation
@font-face { font-family: "Times"; }@font-face { font-family: "Calibri"; }@font-face { font-family: "Cambria"; }p.MsoNormal, li.MsoNormal, div.MsoNormal { margin: 0in 0in 0.0001pt; font-size: 12pt; font-family: "Times New Roman"; }div.Section1 { page: Section1; } "The meaning of the war has been debated for the past 150 years, and it is destined to be debated for the next 150 years as well. But because of the splendid detail marshaled in this remarkable timeline, there can be no dispute over what happened, when, and where, and what it looked like. This is an historic accomplishment of scholarship and imagination."

—Henry Louis Gates, Jr., Alphonse Fletcher University Professor, Harvard University
"This is an extraordinarily valuable reference work that can also be read as a connected narrative of the Civil War. Incisive descriptions of all significant events are here in chronological order, along with useful information on lesser-known persons and incidents. The many illustrations and their captions add yet another important dimension to this wonderful book."
—James M. McPherson, Pulitzer Prize-winning author of Battle Cry of Freedom
"a real factual and pictorial treasure. . . . It is hard to imagine a more accessible survey of the Civil War than this one." —BookPage
"Lavishly illustrated with many rare drawings and photographs, this detailed, narrative timeline of the Civil War will both instruct and delight all who are drawn to the gravitas of these events. Richer and more effective than E. B. Long's classic The Civil War Day by Day, this work is laced with the poignant voices of participants, from presidents to privates, and it unblinkingly portrays the real war on battlefields as well as the tortured collective struggle to destroy American slavery." —David W. Blight, author of Race and Reunion: The Civil War in American Memory, and American Oracle: The Civil War in the Civil Rights Era.