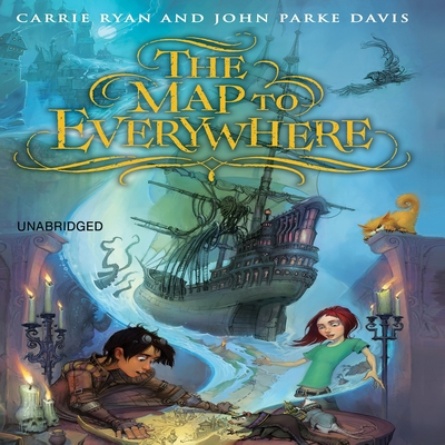 To Master Thief Fin, an orphan from the murky pirate world of the Khaznot Quay, the Map is the key to finding his mother. To suburban schoolgirl Marrill, it's her only way home after getting stranded on the Pirate Stream, the magical waterway which connects every world in creation (Apparently she shouldn't have climbed aboard the mysterious pirate ship that sailed out of nowhere and into a dry Arizona parking lot. How was she to know?).

With the help of a bumbling wizard and his crew, they must scour the many worlds of the Pirate Stream to gather the pieces of the Map to Everywhere, but they aren't the only ones looking. A dark and sinister figure is hot on their tail, and if they can't beat his ghostly ship to find the Map, it could mean the destruction of everything they hold dear-not least of all themselves!

In Carrie Ryan and John Parke Davis' first installment of a fantastical new series, adventure, magic, and hilarity collide in the treacherous skies and dangerous waters of the Pirate Stream. Heart-pounding escapades and a colorful cast of characters will have readers setting sail through this wholly original and unforgettable tale.