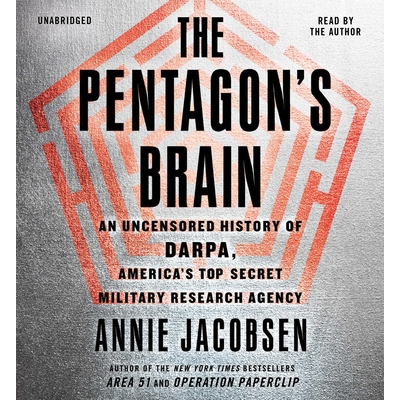 in stock
The Pentagon's Brain
(Unabridged)
add to wishlist give as a gift Play Sample
NATIONAL BESTSELLER A Pulitzer Prize Finalist and the definitive history of DARPA, the Defense Advanced Research Project Agency, from the author of the New York Times bestseller Area 51 No ...
add to cart
NATIONAL BESTSELLER

A Pulitzer Prize Finalist and the definitive history of DARPA, the Defense Advanced Research Project Agency, from the author of the New York Times bestseller Area 51

No one has ever written the history of the Defense Department's most secret, most powerful, and most controversial military science R&D agency. In the first-ever history about the organization, New York Times bestselling author Annie Jacobsen draws on inside sources, exclusive interviews, private documents, and declassified memos to paint a picture of DARPA, or "the Pentagon's brain," from its Cold War inception in 1958 to the present.

This is the book on DARPA--a compelling narrative about this clandestine intersection of science and the American military and the often frightening results.

One of The Washington Post's Notable Nonfiction Books of 2015

One of The Boston Globe's Best Books of 2015

"A brilliantly researched account of a small but powerful secret government agency whose military research profoundly affects world affairs."—The Pulitzer Prize Committee
"An exciting read that asks an important question: what is the risk of allowing lethal technologies to be developed in secret?"—Ann Finkbeiner, Nature
"Filled with the intrigue and high stakes of a spy novel, Jacobsen's history of DARPA is as much a fascinating testament to human ingenuity as it is a paean to endless industrial warfare and the bureaucracy of the military-industrial complex."—Kirkus Reviews
"In this fascinating and terrifying account, Annie Jacobsen regales us with the stories behind the agency's 'consequential and sometimes Orwellian' innovations, including autonomous weapons systems--killer robots that could decide, without human intervention, who lives and who dies."—Bryan Schatz, Mother Jones
"A fascinating and unsettling portrait of the secretive U.S. government agency....Jacobsen walks a fine line in telling the story of the agency and its innovations without coming across as a cheerleader or a critic, or letting the narrative devolve into a salacious tell-all. Jacobsen's ability to objectively tell the story of DARPA, not to mention its murky past, is truly remarkable, making for a terrifically well-crafted treatise on the agency most Americans know next to nothing about."
—Publishers Weekly (starred review)
"A fascinating and sometimes uneasy exploration of the Defense Advanced Research Projects Agency...."—Dina Temple-Raston, The Washington Post
"Annie Jacobsen has a gift for unearthing secret, long-buried information."—Mary Ann Gwinn, Seattle Times
"Jacobsen's account will serve as the model for histories of military research and development and is likely to lead to more works and articles about DARPA.... Engrossing, conversation-starting read..."—Library Journal
"The Pentagon's Brain puts Jacobsen in the company of important writers ... such as Shane Harris and Rajiv Chandrasekran."—Chris Bray, Bookforum
"Annie Jacobsen's considerable talents as an investigative journalist prove indispensable in uncovering the remarkable history of one of America's most powerful and clandestine military research agencies. And she is a great storyteller, making the tantalizing tale of The Pentagon's Brain -- from the depths of the Cold War to present day -- come alive on every page."—Gerald Posner, author of God's Bankers
"Jacobsen offers a definitive history of the clandestine agency.... She explores the implications of DARPA work on technology that will not be widely known to the public for generations but will certainly impact national security and concepts of war."—Vanessa Bush, Booklist (starred review)