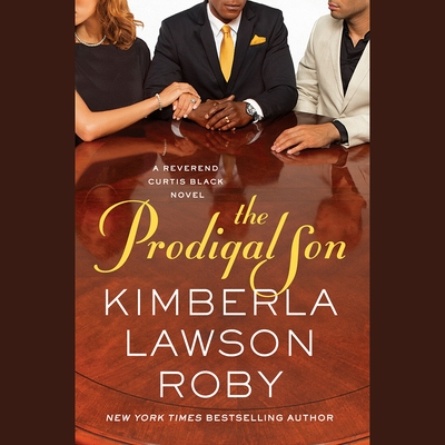 The Reverend Curtis Black hasn't spoken to his son, Matthew, in over a year-not since Matthew dropped out of Harvard to marry his girlfriend, Racquel, and be a full-time father to their infant son. Curtis knows that it was he and his wife, Charlotte, who drove Matthew away, but he prays that one day his son will forgive them and come home.

Matthew, however, can't seem to forget the pain his parents caused him and Racquel. Still, he wonders if maybe they'd been right, as fatherhood is not what he expected, and Racquel's behavior has become increasingly erratic. Matthew genuinely wants to be a good husband, though, and swears he'll never repeat his parents' mistakes. But when an old friend expresses her desire for Matthew, the temptation may be too great to resist...

Then, there's Dillon Whitfield-Curtis's long-lost-son-who has settled in as a member of the Black family. Yet the transition has been anything but easy. Charlotte, convinced he's only after Curtis's money, wishes he would move back to where he came from. Dillon, however, has no intention of going anywhere. After a lifetime in the shadows, he's determined to take his rightful place as Curtis's first-born son and heir, and he'll do whatever it takes to win his father's affection-even if it means playing dirty...

As jealousy builds and secrets pile up, both of Curtis's sons will be pushed over the edge and forced to take drastic action. Can these two troubled young men find their way back into the Black family fold, or will their family ties be undone once and for all?

"Roby writes with high-octane levels of emotion. She pushes her characters hard, spotlighting their flaws, showcasing their weaknesses, drawing in the readers to be more than bystanders."—USA Today

"Roby's fiction...[addresses] issues that are important to women today."—Memphis Commercial Appeal
"Engrossing...the writing is cinematic and the juicy plot moves quickly...Roby has a talent for underscoring the universal challenges of people of faith, and more often than not, that strength carries the story."—Publishers Weekly on THE REVEREND'S WIFE
"Kimberla Lawson Roby weaves truth into fiction."—Indianapolis Star
"Kimberla Lawson Roby has reached a pinnacle most writers only dream of."—Rockford Register Star
"Lively, action packed and full of sassy sensuality, Roby once again has created a story that grabs the reader's attention and holds it until the very end."—Las Vegas Review on A House Divided
"Roby [deals] with real issues in her novels."—Ft. Lauderdale Sun-Sentinel
"Roby, a bestselling author with a devoted audience, knows well the recipe for success: equal parts heartbreak and romance, with liberal dashes of sexual satisfaction."—San Jose Mercury News
"For those thousands of fans, who can't get enough of the 'good' reverend and his wives, this is a book that should not be missed."—Philly.com on A House Divided
"Love, Honor and Betray is an entertaining read and remains true to Roby's style of creatively telling a story."—The New York Amsterdam News