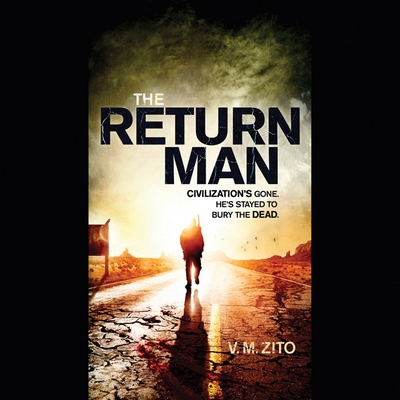 Now Homeland Security wants Marco for a mission unlike any other. He must return to California, where the apocalypse began. Where a secret is hidden. And where his own tragic past waits to punish him again.

But in the wastelands of America, you never know who - or what - is watching you.

"Thrilling, melancholy, and stomach-churningly gory... This is a sturdy and crowd-pleasing novel that squarely hits its target."—Publishers Weekly
'Zombies, action, and overlapping schemes make this a sure winner.'

Best Horror Novel of 2011—drying-ink.blogspot.com
'Hands down one of the best zombie novels I've read in a long, long time. From first page to last, THE RETURN MAN is an astonishing read. With characters you genuinely give a damn about and a story that'll keep you turning page after page, this is an outstanding debut.'—David Moody, author of Autumn
". . . a perfectly balanced layer cake of action and horror . . . This is a stunning debut and matches the feelings I had when I first read the likes of World War Z and Hater . . . you are unlikely to experience a better crafted and adrenalin fuelled thrill ride than V.M. Zito's novel The Return Man."—Liberation Frequency
"A hair-raising quest ... Zito expertly piles on thrills, cliffhangers and numerous twists ..."—The Guardian (UK)
"V.M. Zito manages to do away with many of the most common elements of the zombie novels...some books of this ilk lurch from scenario to scenario like levels in a videogame, but here it's all done smoothly...enjoyable."—SFX
"An overload of thrills, spills and adventure."—The Sun (UK)
"Unputdownable ... A page-turning, action packed, well-crafted debut novel that will take your breath away. Highly recommended."—The Founding Fields