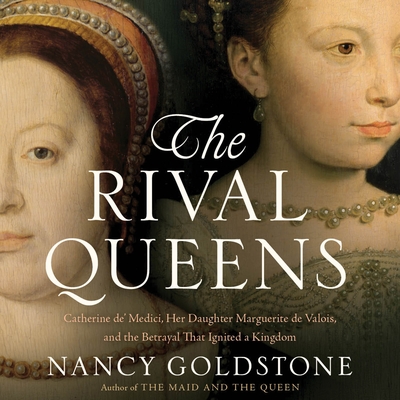 Set in magnificent Renaissance France, this is the story of two remarkable women, a mother and daughter driven into opposition by a terrible betrayal that threatened to destroy the realm.

Catherine de' Medici was a ruthless pragmatist and powerbroker who dominated the throne for thirty years. Her youngest daughter Marguerite, the glamorous "Queen Margot," was a passionate free spirit, the only adversary whom her mother could neither intimidate nor control.

When Catherine forces the Catholic Marguerite to marry her Protestant cousin Henry of Navarre against her will, and then uses her opulent Parisian wedding as a means of luring his followers to their deaths, she creates not only savage conflict within France but also a potent rival within her own family.

Rich in detail and vivid prose, Goldstone's narrative unfolds as a thrilling historical epic. Treacherous court politics, poisonings, inter-national espionage, and adultery form the background to a story that includes such celebrated figures as Elizabeth I, Mary, Queen of Scots, and Nostradamus. The Rival Queens is a dangerous tale of love, betrayal, ambition, and the true nature of courage, the echoes of which still resonate.

"Attention, 'Game of Thrones' fans: The most enjoyably sensational aspects of medieval politics---double-crosses, ambushes, bizarre personal obsessions, lunacy and naked self-interest-are in abundant evidence."—Laura Miller, Salon
"Goldstone adds an enlightening new chapter to a legendary saga and rescues another unjustly neglected woman from the dust pile of conventional history."
—Booklist
"A thrilling tale packed with historical details and shocking revelations. Nancy Goldstone writes with cinematic clarity and eloquently brings to life two indomitable women whose ambitions changed the course of European history."—Ivana Lowell, author of Why Not Say What Happened?
"Goldstone's witty comments make this historical family drama as easy to read as the best fiction, but it's all the more tragic for being true.... Goldstone upends conventional thought with this well-researched and well-written book."—Publishers Weekly (Starred Review)

"The queens Goldstone writes about weren't just any 16th-century queens; these women engaged in love affairs, group sex, killing sprees, and much, much more. Goldstone researched these royal families exhaustively and boiled what she learned down to a book that reads like a transcript of the latest season of Real Housewives but with higher stakes (life or death)."
—Emma Morgenstern, Modern Notion Daily Podcast

"Nancy Goldstone leads her reader with a very sure hand through the most dramatic events of Renaissance France. Her narrative is so gripping that The Rival Queens unfolds like a thriller."—Anka Muhlstein, author of Monsieur Proust's Library
"The Rival Queens is a gripping tale of royal feuds and divided kingdoms. Goldstone has lovingly restored the reputation of Marguerite de Valois; revealing her to be a woman of passion and drive whose fierce loyalties burned bright until the day she died."—Amanda Foreman, author of A World on Fire and Georgiana
"Goldstone's entertaining narrative will intrigue general readers interested in the Middle Ages...or biographies of royal figures or women in history."
—Library Journal
PRAISE FOR THE MAID AND THE QUEEN:

"A dual biography of two fascinating medieval women with the descriptive energy of a novel."—USA Today
"The 16th century, Nancy Goldstone notes in her gripping new biography, was the great age of queens...Goldstone wears her scholarship with flair; perhaps the most extraordinary feature of the story, which moves with the sharp characterization of a novel, is that it is entirely true."—Lisa Hilton, BBC History Magazine
"This is a story of espionage, assassination, intrigue, and chicanery but also one that poignantly reminds readers of the vulnerabilities faced by women of the age....Readers are sure to be captivated by the lush details of these women's lives."—Library Journal
"With compelling storytelling, Goldstone colorfully weaves together the tales of these two women...whose powerful personalities and deep allegiance to France helped shape the country's future."
—Publishers Weekly
"A highly dramatic dual biography.... If serious history readers believe that Tudor England is the only place where family and religious conflict at the highest level makes riveting reading matter, those folks need to take a close look across the English Channel and see what was transpiring at the same time in the French court.... The French contemporary to Elizabeth I was Queen Catherine de' Medici, widow of King Henri II and mother to three kings after him.... Tudor struggles pale in comparison! Read this along with Antonia Fraser's classic Mary Queen of Scots."
—Brad Hooper, Booklist (Starred Review)

"What makes this account so convincing is not the evidence mustered, but the intuition applied....Margot, Catherine, Henry and various villains jump from the page in living, breathing, fornicating reality...an intriguing story, handsomely told."—Gerard DeGroot, The Times of London
"A lively, fast-paced and fascinating account of Joan's story, weaving together the labyrinthine intrigues of medieval politics, the real story behind a medieval fairy tale and the astonishing events that led a young peasant girl from the command of an army to a fiery death at the hands of the English."
—BookPage
"Vivid...astounding....as gripping as ever . . . [A] knowledgeable and accessible account of a turning point in French history."
—Kirkus Reviews
"[Goldstone] spins a tangled tale of rivalry, ambition, and, especially--for the rare women leaders of the time--sheer self-preservation...Goldstone has a remarkable handle on these often Byzantine royal machinations. History brought to vivid life in the characters of these women of purpose."—Kirkus Reviews
"Tudor fans will be lured by this history set in Renaissance France."—Jocelyn McClurg, USA Today