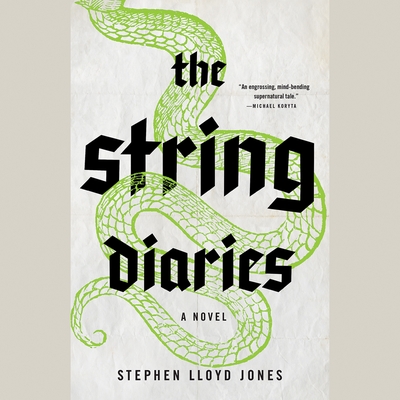 The String Diaries opens with Hannah frantically driving through the night--her daughter asleep in the back, her husband bleeding out in the seat beside her. In the trunk of the car rests a cache of diaries dating back 200 years, tied and retied with strings through generations. The diaries carry the rules for survival that have been handed down from mother to daughter since the 19th century. But how can Hannah escape an enemy with the ability to look and sound like the people she loves?
Stephen Lloyd Jones's debut novel is a sweeping thriller that extends from the present day, to Oxford in the 1970s, to Hungary at the turn of the 19th century, all tracing back to a man from an ancient royal family with a consuming passion--a boy who can change his shape, insert himself into the intimate lives of his victims, and destroy them.
If Hannah fails to end the chase now, her daughter is next in line. Only Hannah can decide how much she is willing to sacrifice to finally put a centuries-old curse to rest.

"This novel is a breakneck chase down a long and winding road with the devil sitting beside you in the car."—Ben Loory, author of Stories for Nighttime and Some for the Day
"Reading The String Diaries made me feel, in the best sense, like a child again. Nothing was more important than the fate of Stephen Lloyd Jones's courageous and very human heroine Hannah Wilde. Meals went uncooked, bills went unpaid, as I waited to find out if she would win freedom for herself and her daughter against the forces of darkness. I was scared, enthralled and amazed by this stunning debut."—Margot Livesey, author of the New York Times bestselling The Flight of Gemma Hardy and Eva Moves the Furniture
"I loved this book."—Marcus Sakey, author of Brilliance
"With The String Diaries, Stephen Lloyd Jones has created a new mythology of the monstrous to rival Stoker's or Shelley's. Grounded in the real world and populated by characters we believe in, this is a book of magic for the doubtful, a fantastic tale for skeptics, at once transporting and convincing."—Andrew Pyper, author of The Demonologist
"I have never read a book with such frenzied impatience. The String Diaries is unputdownable. Stephen Lloyd Jones has written a debut novel as frightening and layered as Elizabeth Kostova's The Historian and as clever and riveting as Dan Brown's The Da Vinci Code."—Benjamin Percy, author of Red Moon, The Wilding and Refresh, Refresh