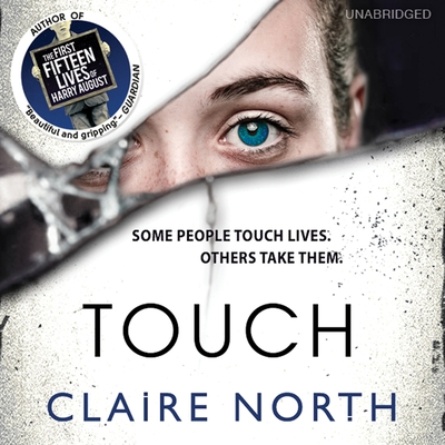 He tried to take my life. Instead, I took his.
It was a long time ago. I remember it was dark, and I didn't see my killer until it was too late. As I died, my hand touched his. That's when the first switch took place.
Suddenly, I was looking through the eyes of my killer, and I was watching myself die.
Now switching is easy. I can jump from body to body, have any life, be anyone.
Some people touch lives. Others take them. I do both.

"I don't say this lightly but The First Fifteen Lives of Harry August is one of the top ten books I've ever read."—James Dashner, New York Times and USA Today bestselling author of The Maze Runner on The First Fifteen Lives of Harry August
"Touch is a story within a story within a story and it's one of the cleverest, most compelling books I've read in a long time. The intoxicating voice, ingenious premise and intricate plot will have readers clamouring for a copy. Touch has bestseller written all over it and Claire North is one hell of a writer."—C. L. Taylor, author of The Accident on Touch
"Another thrilling leap into the unknown."—Toronto Sunday Star on Touch
"A work of sparkling originality that works both as mesmerising thriller and exploration of what it means, at the most profound level, to be human."—Alex Marwood, author of The Wicked Girls on Touch
"I was totally and utterly gripped, it's just extraordinary. Absolutely mesmerizing."—Clare Mackintosh, author of I Let You Go on Touch
"The high stakes and breakneck pace of the plot will draw readers in, and the meditations on what it means to be human and to be loved will linger long after the last shot is fired."—Kirkus on Touch
"Touch is fast, smart, cinematic and with a cracking central idea. This is absolutely destined to be one of the biggest thrillers of 2015... A very, very impressive second outing."—Rick O'Shea, radio presenter, on Touch
"This novel is utterly engaging, addictive, and thought-provoking. The characters are superbly drawn, their interactions realistic and engaging."—Civilian Reader on Touch
"An astonishing re-invention of the time travel narrative. Bold, magical and masterful."—M.R. Carey, on The First Fifteen Lives of Harry August
"Seriously I cannot get over how amazingly good Claire North is. I could have read this book forever. The First Fifteen Lives of Harry August was so smart, Touch is beyond genius. This will be one of THE books of 2015. Mark my words."— Bite the Book (Australia) on Touch
"Little short of a masterpiece."—Independent (UK) on Touch