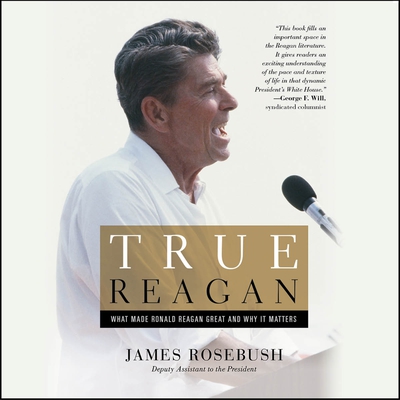 And why does it matter to the nation today?

Just the mention of his name still evokes deep admiration and affection among Americans of every stripe, on both sides of the aisle. Many have previously sought to capture the essence of this very public figure often called "mysterious and unknowable." But now, as James Rosebush tells Reagan's story from first-hand experience in TRUE REAGAN, we come closer to understanding the heart of this great American.

In his roles as the longest-serving Chief of Staff to Nancy Reagan and Deputy Assistant to President Reagan (his point man on philanthropy and public/private partnerships), James Rosebush had unrivaled one-on-one access to Reagan, observing his personality, his decision-making, his guarded nature. Rosebush's revelations are moving and meant to inspire us to look to our 40th President for guidance now as we face the global challenges of a complicated 21st century.

Ronald Reagan was first and foremost an intensely private person, although the life he led placed him at the center of people's attention from his earliest years. Small-town boy and college athlete, sportscaster and lifelong sports fan, actor and movie star, union leader and TV spokesman, Democrat and Republican, governor and president: what an incredible and extraordinary path. Rosebush tells how his center core was formed by his mother, who devoted herself to helping others even as the Reagans struggled themselves. The spiritual foundation she instilled in him by teaching him the Bible governed his thoughts, beliefs and actions all his life.

In a very real sense, his upbringing destined Reagan to become a global evangelist for American Exceptionalism - but importantly, as Rosebush learned first-hand, that did not mean Reagan thought Americans themselves were superior, as today's pundits and politicians often preach. Rather, Reagan believed that the ideals of America's founding were superior, enabling all Americans to live lives based on high ideals and spiritual principles, and thus achieve unparalleled success. Reagan was uniquely able to lead from true conviction and strength, his confidence stemming from an unshakeable fundamental belief system.

Better understanding the essence of this inspiring and principled leader is critical to our future. Journey back with Rosebush through the innumerable examples he recounts from first-hand observation and marvel once again at TRUE REAGAN.

Jim captures the wit, wisdom, and warmth of President Reagan. He was there as Reagan set out to change America and wound up changing the world. Jim had a unique perch to understand the character and leadership attributes of our beloved 40th President. He also was a keen observer of the real, not Hollywood, love affair between the President and Nancy and the impact that had on Reagan's achievements.—Kenneth M. Duberstein, former White House Chief of Staff to President Reagan
Rosebush understands Reagan-what motivated him and what made him great. We need a whole lot more of Reagan's powerful moral courage and Jim Rosebush has shared what the President revealed to him on this subject during the years he worked in the White House. A must-read for anyone who loves Reagan and wants to understand him better. A blueprint for our current and future leaders. They could learn a lot from this book.—Larry Kudlow, CNBC Senior Contributor, Radio Host of the nationally syndicated Larry Kudlow Show
Jim Rosebush brings special perspective to the subject of Ronald Reagan. He enjoyed the unique position of having worked for both the President and First Lady. Jim is a natural communicator and, as such, has the capacity to reach a wide audience on a topic of great national interest.—Susan Eisenhower
This book fills an important space in the Reagan literature. It gives readers an exciting understanding of the pace and texture of life in that dynamic President's White House.—George F. Will, Syndicated Columnist

Jim Rosebush's insights are firsthand, close-up, and reliable. His is a fine addition to the growing canon about our greatest modern President.—Mitch Daniels, President, Purdue University, and former Governor of Indiana
No one was in a position to observe and understand the unique character of Ronald Reagan better than Jim Rosebush, who interacted with the President and his family as a trusted professional. His judgement on White House matters public and private is authoritative.—John Lehman, former Secretary of the Navy and member of the 9/11 Commission
This book leaves no doubt that Ronald Reagan was the most consequential President of the second half of the twentieth century. He was my model as Mayor of New York. The book should be required reading for all presidential candidates and voters.—Rudolph W. Giuliani, former Mayor of New York City, and Associate Attorney General and U.S. Attorney appointed by President Ronald Reagan
This up-close, personal account by a real White House insider gives us the best insight yet into who Ronald Reagan really was and what made him tick.—Bob Schieffer, CBS News
I doubt that anyone had more time with the Reagans than Jim Rosebush---As Nancy Reagan's Chief of Staff, Jim was indispensable both in Washington and when they traveled abroad. In my job as Chief of Protocol, I had many occasions to be grateful to Jim for his empathy and efficiency and he was always a delight to work with.—Selwa "Lucky" Roosevelt