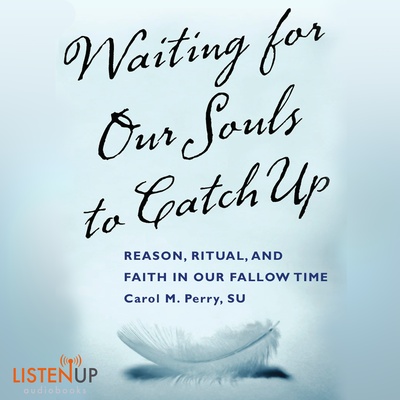 In the frantic world in which we live, we all need to take the time to stop and breathe. How, though, can we nurture our inner beings when the outside ...

In the frantic world in which we live, we all need to take the time to stop and breathe. How, though, can we nurture our inner beings when the outside world demands so much from us? Waiting For Our Souls to Catch Up invites readers to start their own journey of the heart and of the mind through which they can achieve great spiritual rewards with a small effort of faith, guided by reason. From the small rituals that improve our daily lives to the shared study of the historical and scriptural legacy of the world's great religions, Waiting For Our Souls to Catch Up is guide for the ages.

Sister Carol Perry is the "nun in the basement" at Marble Collegiate Church, which is the oldest Protestant congregation with continuous service in North America and was made famous by Norman Vincent Peale (The Power of Positive Thinking). A Catholic nun, Sister Carol has been Marble's Resident Bible Scholar for three decades. She co-authored Called and Sent and has received two National Endowment for the Humanities grants. Carol was named Educator of the Year by the Association of Teachers of New York and ahs lectured across the country on scripture, Christian feminism, and the role of women in the Biblical world. A sister of St. Ursula, she is a graduate of Fordham University and earned an M.A. in Theology at St. Mary's, Notre Dame.

“Bring your highlighter and your sense of wonder to a comfortable chair and marvel at what you didn’t know about Biblical history. Waiting For Our Souls To Catch Up is a must read for all those seeking a spiritual peace in a high-tech world. But most of all bring your appreciation of Sister Carol Perry’s scholarly brilliance in refining prayer, faith, and grace. I love this book. I will always have two, my annotated one and another one to give away.”
— Rolland G. Smith
Broadcast journalist, author, and poet

“Sister Carol Perry is one of the most brilliant biblical scholars I have ever known. She truly breaks the mold: a loyal Roman Catholic who marches ahead of and challenges her denomination in much of the world’s social agenda, a respected nun who has been on the staff of America’s oldest Protestant congregation for over 30 years, and a woman of maturity who holds an undeniable appeal to the young and the hip. When you read this book, you are in for a treat. It will leave you longing for more.”
— Michael Brown
Senior Minister
Marble Collegiate Church