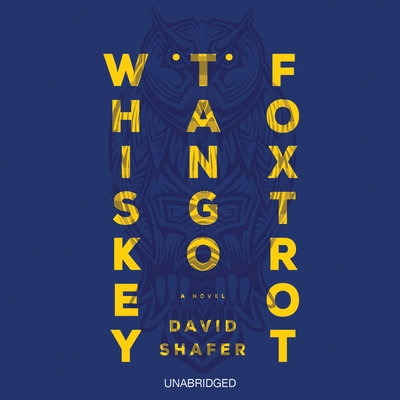 The Committee, an international cabal of industrialists and media barons, is on the verge of privatizing all information. Dear Diary, an idealistic online Underground, stands in the way of that takeover, using radical politics, classic spycraft, and technology that makes Big Data look like dial-up. Into this secret battle stumbles an unlikely trio: Leila Majnoun, a disillusioned non-profit worker; Leo Crane, an unhinged trustafarian; and Mark Deveraux, a phony self-betterment guru who works for the Committee.
Leo and Mark were best friends in college, but early adulthood has set them on diverging paths. Growing increasingly disdainful of Mark's platitudes, Leo publishes a withering takedown of his ideas online. But the Committee is reading--and erasing--Leo's words. On the other side of the world, Leila's discoveries about the Committee's far-reaching ambitions threaten to ruin those who are closest to her.
In the spirit of William Gibson and Chuck Palahniuk,Whiskey Tango Foxtrot is both a suspenseful global thriller and an emotionally truthful novel about the struggle to change the world in- and outside your head.

"Smart, funny . . . A techno-thriller with a soul . . . Shafer etches diamond-sharp and precisely observed contemporary satire."—Laura Miller, Salon
"Hilarious, moving, and wildly ambitious, David Shafer's Whiskey Tango Foxtrot reads like a plot against America dreamed up by the NSA and then ghostwritten by Don DeLillo-a love story-cum-international thriller about our surveillance society that's so convincingly paranoid you'll tape over your webcam. Forget debut: it marks the arrival of a major new writer."—Adam Ross, author of Mr. Peanut
"Is it too late to nominate a candidate for novel of the summer? . . . A paranoid, sarcastic and clattering pop thriller . . . Mr. Shafer gets the playfulness-to-paranoia ratio about exactly right. . . . He's got a sick wit and a high style. Reading his prose is like popping a variant of the red pill in The Matrix: Everything gets a little crisper. . . . Whiskey Tango Foxtrot is a page-turner, yet many more "literary" writers will, I suspect, envy Mr. Shafer's tactile prose. His eye is hawklike. . . . Mr. Shafer has written a bright, brash entertainment, one that errs, when it errs at all, on the side of generosity, narrative and otherwise. It tips you, geekily and humanely, through the looking glass."—Dwight Garner, New York Times
"Shafer's savvy, sardonic take on our social media- and Big Data-worshiping society is as current as your Twitter feed..Just in time for your August beach trip, put Whiskey on your Amazon Wish List. As if they don't already know you want it."—Patty Rhule, USA Today
"Roaming from Burma to Oregon to a mysterious ship in the open ocean, David Shafer's debut novel is a stylish, absorbing, sharply modern hybrid of techno thriller and psychodrama that bristles with wit and intellect and offers a dark, incisive vision of the global consequences of turning our lives into collectable data. This book will stay with you long after you've finished it." —Maggie Shipstead, author of Astonish Me
"Hilarious and chilling, fast-paced and thoughtful, Whiskey Tango Foxtrot is literary entertainment of the highest order. While the novel reads like a comic thriller, it speaks powerfully to our over-connected, over-watched, privacy-depleted moment. I admire the hell out of it."—Ken Kalfus, National Book Award nominated author of Equilateral
"Zinging with wit and pop culture savvy . . . Shafer's writing is hip, wickedly hilarious, cutting edge, and ultimately concerned with old-fashioned notions of morality and redemption. . . His inventive, comic, dystopian semi-thriller restored my faith in fiction."—Mark Lindquist, Seattle Times
"Outlandishly clever. Evoking the technological-paranoia of Philip K. Dick and the verbal pyrotechnics of David Foster Wallace, Shafer's digital take-over is absurdly comical and all too familiar. The characters are complicated, fascinating, and fully engaging while the threats feel frighteningly real."—Joe Meno, author of The Great Perhaps
"Shafer hits all the right buttons in his debut as he mixes crime fiction, espionage, and SF in a darkly comic novel."—Publishers Weekly (starred)
"David Shafer's amazing debut novel should be a controlled substance, its addictive quotient of the highest order. I devoured it imagining this is what a brainstorming event between Thomas Pynchon and Edward Snowden would deliver."—Bob Shacochis, author of The Woman Who Lost Her Soul
"A Graham Greene novel written by Edward Snowden. The Anonymous novel I have been waiting for -- a stiletto thriller of the too-real panopticon digitizing our every breath nowadays."—Tom Paine, author of Scar Vegas
"An edgy, darkly comedic novel whose characters and premise are as up-to-the-minute as an online news feed but as classic as the counterculture rebellions once evoked by Edward Abbey and Ken Kesey...Shafer's arch prose, comedic timing and deft feel for shadowy motives in high places are reminiscent of the late Richard Condon (The Manchurian Candidate), only with sweeter, sweeper characterizations...It's possible that Shafer is remaking the international thriller into something more humane and thus more credible."—Kirkus Reviews
"Genius techno-­thriller à la Neal ­Stephenson, powered by social-media info-conspiracy à la Dave Eggers."—Lev Grossman, Time
"A unique literary treat . . . As ambitious a fiction debut as you're ever likely to encounter . . . At turns the novel feels like a breakneck spy thriller, until, just around the next corner it morphs into a darkly comedic look at the realities of the human condition in our increasingly technology-fueled world."—Brooke Wylie, Examiner.com