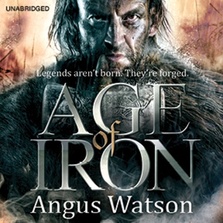 LEGENDS AREN'T BORN. THEY'RE MADE.
Dug Sealskinner is a down-on-his-luck mercenary traveling south to join up with King Zadar's army. But he keeps rescuing the wrong people.
First Spring, a child he finds scavenging on the battlefield, and then Lowa, one of Zadar's most fearsome warriors, who has vowed revenge on the king for her sister's execution.
Now Dug's on the wrong side of the thousands-strong army he hoped to join ­-- and worse, Zadar has bloodthirsty druid ... 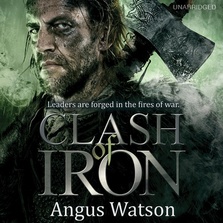 The second book in Angus Watson's epic Iron Age fantasy trilogy.
LEADERS ARE FORGED IN THE FIRES OF WAR

Iron Age warriors Dug and Lowa captured Maidun castle and freed its slaves. But now they must defend it.

A Roman invasion is coming from Gaul, but rather than uniting to defend their home, the British tribes go to battle with each other -- and see Maidun as an easy target.

WARRIOR QUEENS AND ROMAN INVADERS DO BATTLE IN THE FINAL VOLUME OF THIS THRILLING EPIC FANTASY TRILOGY.
Caesar's soldiers have murdered, massacred and pillaged their way through Gaul and loom on the far side of the sea, ready to descend upon Britain - with them are an unstoppable legion of men twisted by dark magic. Somehow Queen Lowa must repel the invasion, although her best general is dead and her young druid powerless. She faces impossible ...